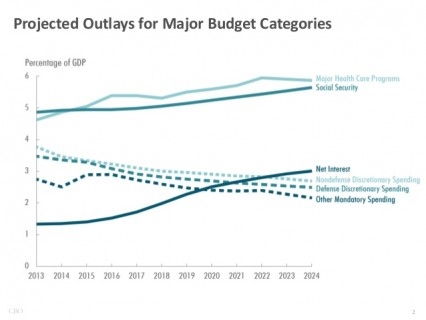 Without changes in the law, health care, Social Security, and interest on the debt will eat up 85 percent of all new federal government spending over the next 10 years, according to the latest estimates by the Congressional Budget Office. By contrast, CBO expects most of the rest of government, including income security for low-income households, national defense, transportation, health and safety, education, and the like to shrink to its lowest levels—as a share of the economy—since before World War II.

Combined, all of government—except for health care, Social Security, and net interest—will absorb only about 7.4 percent of Gross Domestic Product by 2024, down by one-fifth from 2013 and one-third lower than it was in the mid-1970s. 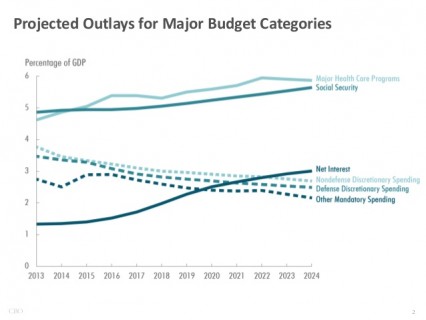 Total spending would remain close to the 40-year average of about 21 percent of GDP, despite an aging population that will require more medical care and receive, in aggregate, much more in Social Security benefits. And despite annual interest costs that CBO figures will rise from $230 billion this year to almost $800 billion in a decade, or from 1.3 percent of GDP to 3 percent.

While CBO’s updated deficit forecast got most of the attention (if you missed it: the short-term deficit is due to shrink, thanks mostly to a rebounding economy), the more interesting story is what is expected to happen to federal spending under current law.

If Republicans win control of the Senate and retain dominance in the House, don’t be surprised to see a fundamental battle over spending beginning next spring. Remember, for many in Congress, the deficit isn’t the issue. It is the size of government.

Taxes, which have been the focus of so many past fiscal wars, may very well take a back seat over the next couple of years. Comprehensive tax reform seems largely off the table until at least after the next presidential election. And it is hard to see the GOP pushing for big tax cuts in 2015.

Think of the CBO report as a map of the coming field of battle. As always, the budget agency’s projections assume current law. That means the sequester’s automatic spending cuts for much of government resume as scheduled after fiscal 2015. Without those cuts, spending would be $874 billion higher over the next decade (plus $156 billion in interest on the added debt).

While Medicaid, Social Security, and a few other programs are exempt from those deep spending cuts, nearly everything else is not. It is a vision of government that will squeeze out many Democratic priorities, yet is only a starting point for many Republicans. It is already easy to see where the pressure points will come when Congress and President Obama once again square off over spending. And keep in mind: If Congress does not act (often the safest bet), the cuts in the CBO baseline will happen.

One example: The Pentagon is due for deep cuts under the sequester, but will they still be acceptable to lawmakers of either party given recent events in Syria, Iraq, and Ukraine? If the Pentagon gets more, will Republicans try to make up the difference by cutting domestic spending even more deeply?

Behind the raw numbers, CBO’s fiscal update describes a very different government than we’ve come to expect. Beyond providing health care and Social Security and paying ever-more interest on the growing debt, government and the services it provides are scheduled to shrink, and perhaps by quite a lot.

Is this what a majority of voters really want? I’m not sure, but we may be about to find out.