CBO’s Simple Story about the Deficit

A graph on the cover of the Congressional Budget Office’s summer budget update illustrates two policy paths we could pursue over the coming decade. One would essentially keep our deficit manageable through 2021. The other would make things much worse.

The light blue area in the graph shows the deficit’s history since 2000 and CBO’s projection over the coming decade if Congress lets the 2001-2003 tax cuts expire in 2013, stops patching the alternative minimum tax (AMT), and allows scheduled cuts in Medicare payments to physicians to occur. Under that scenario, the deficit would shrink to just 1.2 percent of GDP, a sustainable level in a healthy economy. (Of course, entitlements will explode the deficit in the long run but that's another story.)

If Congress doesn’t let current law play out for those three policies, the deficit would grow over the decade, reaching a level nearly four times the current law deficit in 2021 (see the dark blue area in the graph). Almost all of the increase in the deficit would come from extending the tax cuts and the interest payments on the debt increase (see the second graph, taken from CBO Director Doug Elmendorf’s blog on the update). 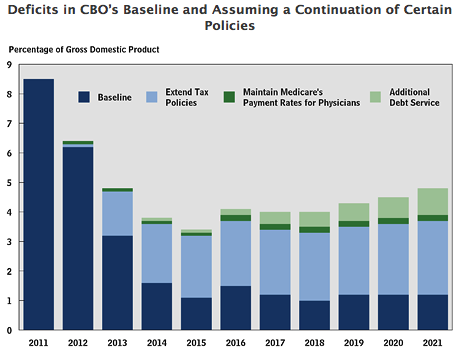 Few people want to see the tax cuts to expire as scheduled for all taxpayers in 2013. The debate last December focused on whether to extend them for everyone or only for the poorest 98 percent of Americans. The difference was between worsening the deficit by $3.6 trillion over the decade or by only $3 trillion. That’s not how to close the budget gap.

We'll resume the debate over extending the tax cuts as the new expiration date approaches at the end of next year. Letting the tax cuts and the AMT patch expire for everyone would slash the deficit but is surely not the best thing to do. Pruning back tax expenditures (both to raise revenue and to cut rates) and culling spending programs (including entitlements) are better alternatives. But making current law the starting point and the default outcome for budget negotiations could push the president and Congress to find better solutions.

Regardless of the spending and tax options on the table, though, it’s clear that a further extension of expiring tax cuts will only make it harder to solve our deficit problem.