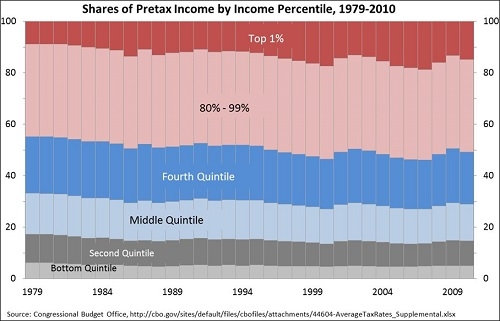 Just as President Obama was decrying our nation’s rising income inequality, the Congressional Budget Office provided him with some new ammunition. CBO’s latest report on household income and taxes—which goes only through 2010—shows that the rich have indeed gotten richer. (Full disclosure: In my former life at CBO, I helped assemble these income and tax data.)

CBO finds that over the past three decades, a growing fraction of income has gone to the top of the income distribution (see first graph). The top fifth saw its share of pretax income rise from 43 percent in 1979 to more than 50 percent in 2010. Much of the gain went to the top 1 percent, whose share increased from 9 percent to 15 percent over that period. 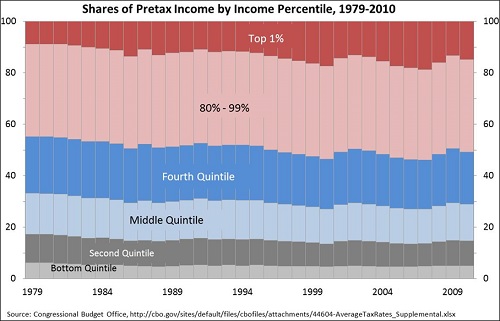 In contrast, households in the bottom two quintiles saw their income shares drop. The poorest 20 percent collected just 5.1 percent of pretax income in 2010, down from 6.2 percent in 1979. Households in the second quintile suffered a bigger decline—from 11.2 percent to 9.6 percent over the period.

This trend has been quite steady for the past three decades, though it was temporarily interrupted by the bursting of the dot-com bubble in 2000 and again in 2008-2009. But CBO shows inequality began growing again in 2010. That year, households in the bottom 60 percent got less than 30 percent of total income and the Tax Policy Center projects that their share will fall further in the future.

What about after-tax income? Has the federal tax system narrowed the disparity in incomes over the past 30 years? Not by much, according to CBO. 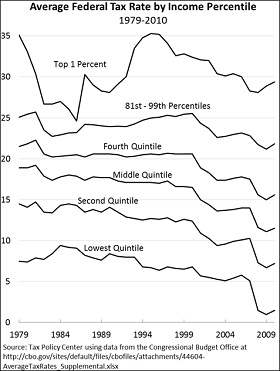 Average federal tax rates have fallen over the last 30 years but, at least until recently, households at all income levels benefited roughly equally. Between 1979 and 2010, the average tax rate declined by the same 6 percentage points for the bottom and middle quintiles as for the top 1 percent (see second graph).

We won’t know for a few years what has happened since 2010 but it appears that income inequality has once again grown. Wages have stagnated for low- and middle-income households while corporate profits and stock prices have skyrocketed.

The American Tax Relief Act of 2012 (ATRA) may have somewhat offset those relative changes in pre-tax income by raising taxes on high-income households. But those tax hikes at the top are too small to reverse the overall trend.

Inequality is a serious concern and it shows no sign of abating.  The tax system may be part of the solution, but if past history is a guide, other policies will play much larger roles.