The fiscal 2020 budget signed into law December 20, 2019 is a big disappointment for tax administration, continuing the over 20-percent inflation-adjusted decline in IRS funding since 2010 that has eroded enforcement, reduced audits, and handicapped performance. 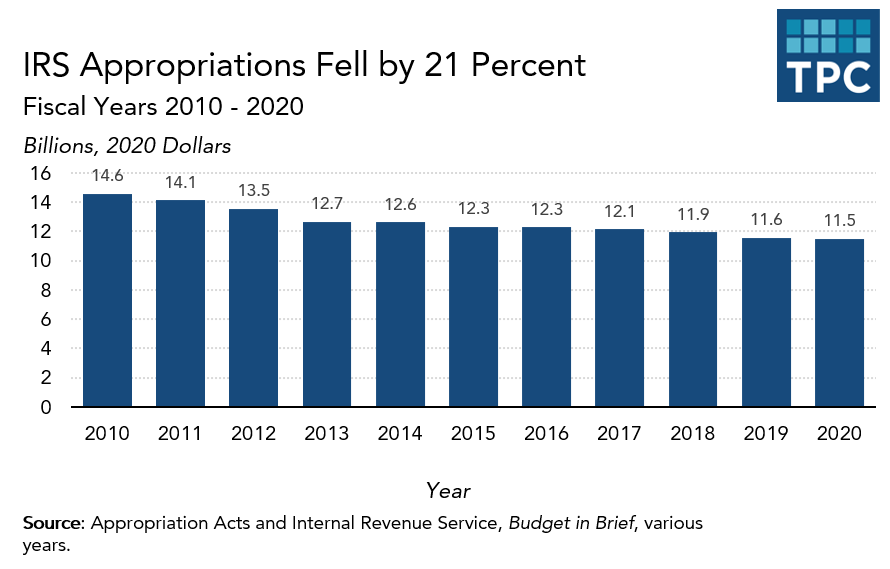 Here are the key takeaways for tax administration:

First, overall IRS funding increases by $207 million from Fiscal Year 2019, to $11.5 billion. While this 1.8 percent increase over last year is not a surprise, it is a big disappointment. It comes up on the short end of splitting the difference between the IRS budget recommended in bills passed earlier by the House ($12 billion) and Senate ($11.4 billion). And it fails to keep pace with expected inflation for 2019-2020. Moreover, a 3.1 percent pay increase for federal civilian workers will absorb virtually all of the modest boost for the labor-intensive IRS, where two-thirds of the budget goes to staffing.

This year’s IRS appropriation is just more of what we’ve seen over a decade of decline. Compelling articles by ProPublica on the gutting of the IRS have reported that “An eight-year campaign to slash the agency’s budget has left it understaffed, hamstrung and operating with archaic equipment.”

Second, Congress kept a tight lid on each of the four parts of the IRS budget.

In presenting the administration’s FY 2020 IRS budget, Treasury Secretary Mnuchin said his goal was to “deliver a customer experience comparable to the best financial institutions in the world.” But if reaching that goal depends on more resources, it’s hard to see how the new budget will advance it very rapidly.

But whether the reaction is protest or silence, there is ample cause for alarm.

The FY 2020 budget keeps the IRS on a steadily declining course, a path far from the breakthroughs needed to make it a fully functional 21st century tax agency.