A Bubble with a Bite: The House Tax Bill Implies a 49.4 Percent Top Effective Tax Rate

Later this week, the House will vote on its version of the Tax Cuts and Jobs Act (TCJA). The bill advertises a top individual income tax rate of 39.6 percent on wage income (the same as today, though it would kick in at a much higher taxable income level than current law). However, some taxpayers would face an effective marginal federal tax rate of 49.4 percent on wages—a rate generally not seen since 1986.

The House bill relies on a “bubble” tax rate, a hidden way to boost taxes on the wage income of some high-income households without acknowledging a tax rate increase. Bubbles are not new. The often-praised Tax Reform Act of 1986 created one, though it is long gone.  There are bubble tax rates in the current code, too.  The House bill would repeal those, but replace them with an even bigger bubble.

While today’s headline top rate is 39.6 percent, that oft-cited number misrepresents the true top marginal effective rate that a taxpayer pays now. First, Medicare taxes and the surtaxes enacted as part of the Affordable Care Act can add 3.8 percentage points to the marginal tax rate, to produce a 43.4 percent tax rate.

The House version of the TCJA would repeal personal exemptions (and thus PEP) and end the itemized deduction limitation (and most itemized deductions).  But then it would create a new bubble of its own, which would set the top effective tax rate to 49.4 percent.

Here’s how it would work: The House bill would reduce the number of tax brackets to four, starting at 12 percent and rising to the current 39.6 percent. The tax benefit of the 12 percent bracket is phased out for taxpayers with adjusted gross income (AGI) over $1 million ($1.2 million for married couples filing jointly). The benefit is phased out by essentially imposing a 6 percent surtax on AGI over the thresholds until income rises enough that the benefit of the 12 percent rate is erased.

For example, under the House bill, the 12 percent rate directly applies to the first $90,000 of taxable income for married joint filers. But to recapture $90,000 times 27.6 percent (the difference between 39.6 percent and 12 percent) at a six percent rate, the phase-out would have to occur over a range of about $414,000. As a result, married joint filers with income between $1.2 million and $1.614 million would face an effective marginal tax rate on wages of 49.4 percent, consisting of: 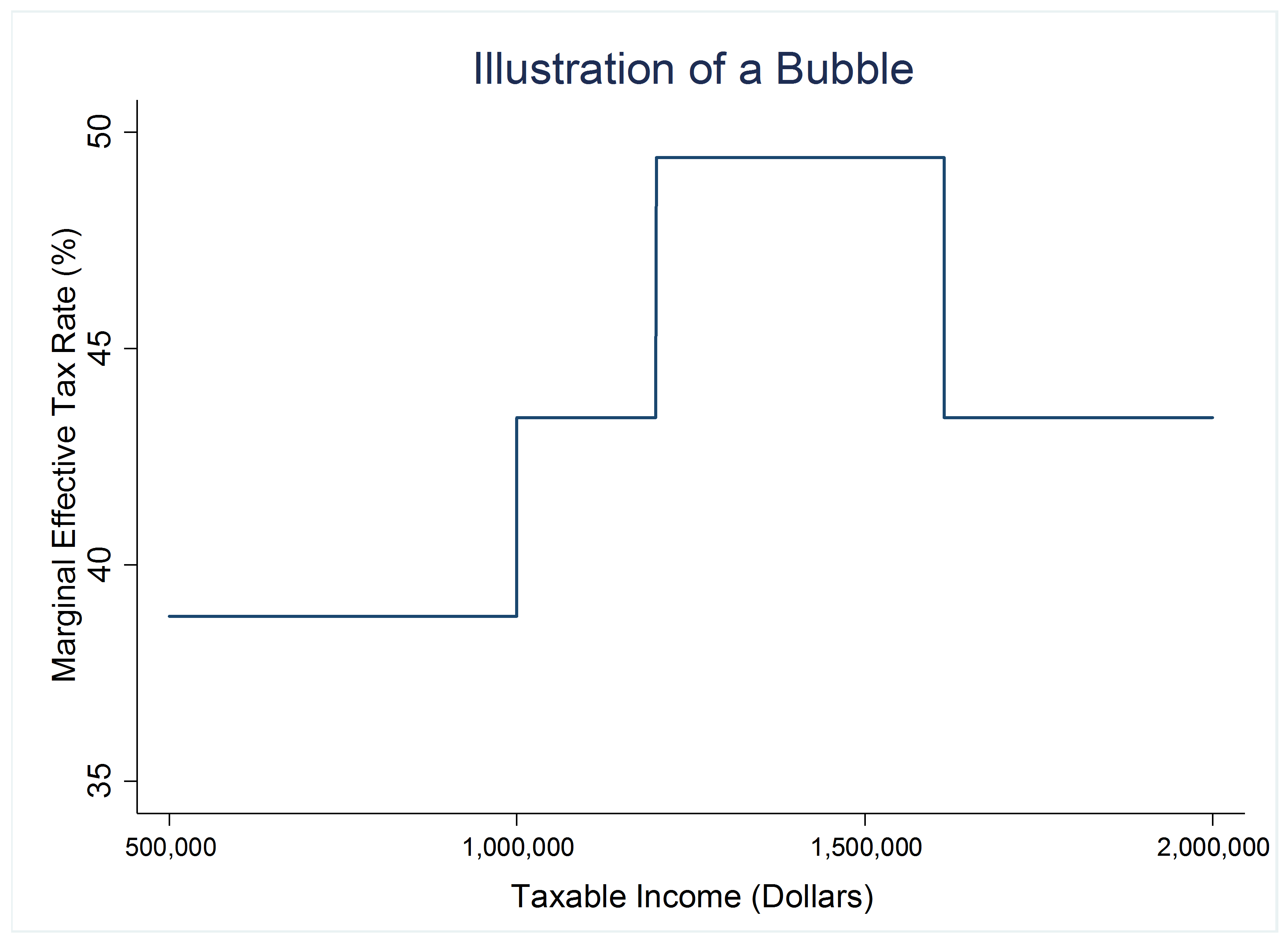 The graph shows the top effective marginal tax rate under the House bill for married couples with no children by income level. It assumes that households bear the employee and employer shares of the payroll tax and uses the statutory rate of 2.9 percent for Medicare.

The Tax Reform Act of 1986 also created a “bubble” rate on certain income levels. In effect, it enacted a 33 percent marginal tax rate for joint filers with incomes between $75,000 and $170,000 (and individuals with incomes between $45,000 to $95,000) by phasing out the benefits of the 15 percent tax bracket. This allowed Congress to claim it had cut the top individual income tax rate from 50 percent to 28 percent.