Both Clinton and Trump would reduce tax incentives for charitable giving

Both Hillary Clinton and Donald Trump have proposed income* tax changes that would result in less charitable giving. While the effects are indirect, the Tax Policy Center estimates that Trump’s plan would reduce individual giving by 4.5 percent to 9 percent, or between $13.5 billion and $26.1 billion in 2017, while Clinton’s plan would reduce giving by between 2 percent  and 4 percent, or $6 billion to $11.7 billion.

The actual reduction in charitable gifts would depend mainly upon how responsive givers would be to smaller tax incentives.  However, higher-income taxpayers would be affected the most. Lower-income households would not likely reduce giving since most do not itemize deductions today and would not under either the Trump or Clinton plans. 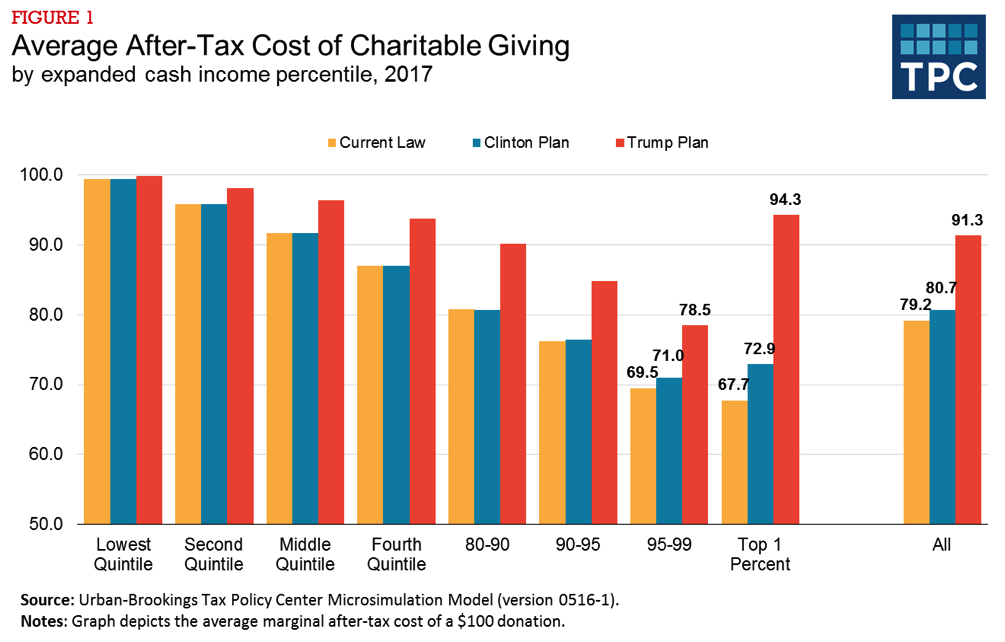 Start with Trump, who would reduce the tax benefits of charitable giving in three ways:

Second, by raising the standard deduction to $15,000 ($30,000 for couples), Trump would sharply reduce the number of taxpayers who itemize. People who stop itemizing can no longer deduct their charitable contributions and thus lose the tax break. In 2017, 27 million of the 45 million who now itemize would opt for the standard deduction, a decline of 60 percent.

Finally, Trump would cap itemized deductions at $100,000 for singles and $200,000 for joint filers. IRS data indicate that in 2014 taxpayers with over $1 million in adjusted gross income (AGI) deducted an average of $165,000 for charitable contributions and another $260,000 for state and local taxes. Since the state and local tax deduction alone would exceed Trump’s proposed cap on itemized deduction, many high-income taxpayers would lose their tax incentive to give to charity.

While all these changes might discourage charitable giving, Trump’s generous tax cuts would also leave taxpayers more money to give to charity. This would particularly be true for very high income households: In 2017, tax cuts for people in the top 1 percent would average more than $200,000.

Clinton’s plan would do little to change the giving incentives of taxpayers for the bottom 95 percent of the income distribution. She’d slightly increase incentives for low- and middle-income taxpayers to give to charity by boosting their after-tax incomes.

In contrast to Trump, Clinton would significantly raise taxes on high-income households. She’d impose a 4 percent surcharge on adjusted gross income (AGI) in excess of $5 million, increase capital gains rates based on holding periods, create a minimum tax of 30 percent of AGI phasing in between $1 and $2 million of incomes, and put a 28 percent limit on the value of tax benefits from deductions other than the charitable deduction. On net these not only decrease after-tax incomes, but also lead some current itemizers to take the standard deduction and thereby lose the charitable deduction. The proposal with the largest effective on giving incentives is the 30 percent minimum tax (i.e., the “Buffett Rule”), which would reduce the incentive for affected taxpayers.

Overall both candidates would reduce the tax incentives for giving to charity, probably not what either really intended.