The Big Six Tax Outline Would Lose $2.4 Trillion Over 10 Years, According To TPC’s New Dynamic Score

A new Tax Policy Center “dynamic analysis” of the Big Six’s “Unified Framework” tax plan finds it would fail to achieve President Trump’s promise of a significant, permanent boost in economic growth. As a result, the outline would reduce federal tax revenue by roughly $2.4 trillion over the next decade, nearly the same as under conventional scoring.

TPC’s own dynamic analysis finds the Framework would boost economic growth for the first few years but slow the economy after that. TPC also did a second analysis employing the Penn-Wharton Budget Model (PWBM) that relied upon TPC’s conventional estimates of the Framework’s effect on revenues and tax rates. It shows the outline would result in small increases in growth from 2018-2027 and slow the economy in the following 10 years.  The new TPC estimates are dynamic scores that include the effects of the tax changes on the overall economy and, in turn, the effects of those economic changes on tax revenue.

While the Framework’s tax rate cuts would generate new economic activity at first, those growth effects would be washed out in a few years by the effects of higher budget deficits. Because the federal government would have to borrow more to finance the tax cuts, less money would be available for private investment.

President Trump and his top aides have argued that the Framework would result in permanent real annual growth in Gross Domestic Product of at least 3 percent. While TPC found the outline would modestly boost GDP in the first few years, its effects on the economy would be increasingly negative over time, resulting in slower, not faster, growth over both the 10 and 20 year periods.

The PWBM analysis using TPC inputs shows a slightly different pattern. It finds the tax outline would result in more growth at first but that low level of added economic activity would hold roughly steady through 2027. In the second decade, however, the Framework’s effects on growth also would turn slightly negative. 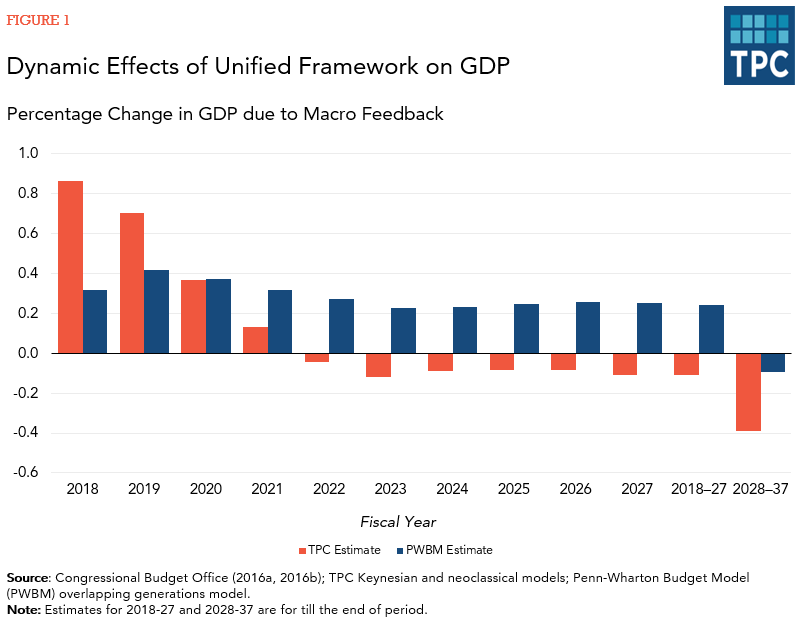 TPC analyzed the plan with a combination of two dynamic models—a Keynesian model and a neo-classical model. TPC analyzed the framework as it was described by the Big Six, supplemented with assumptions about unspecified details from the Administration’s April tax outline and the House Republican leadership’s 2016 Better Way plan, which the Framework generally resembles.

TPC found that the Framework would boost the economy in the short-run as people spend some of their increased after-tax income and businesses increase investment, temporarily raising output relative to its potential level. However, over time the tax cuts --and the increased deficits they produce—squeeze the overall supply of capital, raise the cost of borrowing, and lower firms’ level of investment. The smaller capital stock also diminishes wage growth, which in turn reduces labor supply.

The PWBM estimates differ from TPC’s dynamic models for two main reasons. The PWBM estimates do not incorporate the same short-run effects as TPC’s model. Second, relative to TPC, the PWBM projects that changes in marginal tax rates have a greater impact on the overall cost  of funds to firms, and therefore on their cost of borrowing and their level of investment.

Like the recent tax proposals before it, including Donald Trump’s various campaign plans and the House GOP’s 2016 tax blueprint, the September Framework would do little or nothing to boost the economy over the medium or long-term. Thus, it would reduce federal revenues by trillions of dollars. In each case, the benefits of ambitious tax rate cuts are reversed by their sponsor’s unwillingness to pay for their largess.