Former Vice President Joe Biden’s tax proposals would have only modest effects on the economy, according to a new report by the Tax Policy Center (TPC). His proposed tax agenda would boost output by 0.2 percent in 2021, but the net tax increases would reduce it for most of the next two decades, including by 0.3 percent in 2030. By 2040, the tax proposals would increase output slightly, and the positive effect would grow larger in later years. Those economic effects would reduce the revenue gain from the proposals modestly over each of the next two decades. 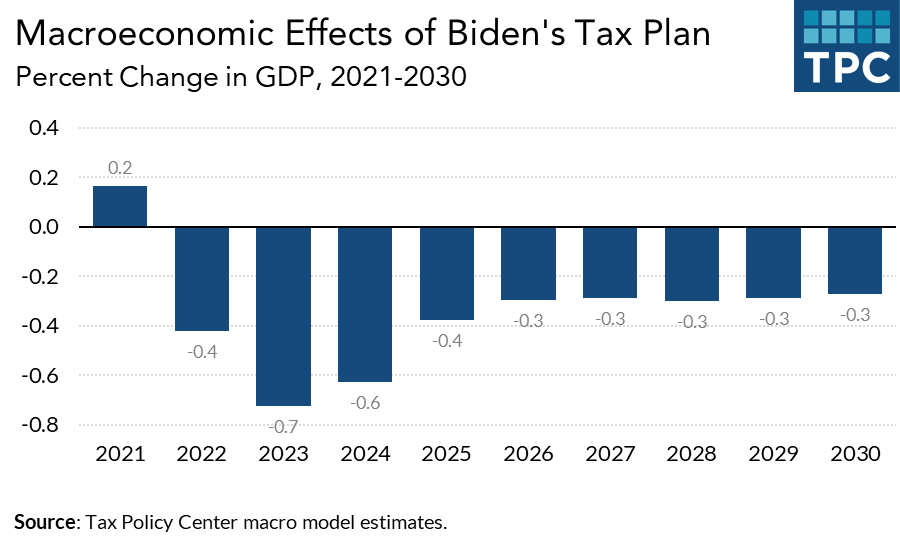 TPC assumed Biden’s tax increases would not be effective until January 1, 2022 but that his proposed temporary increase in the Child Tax Credit would reduce taxes in 2021. Because his tax changes would increase after-tax incomes in 2021 but reduce them afterwards, that initial increase in aggregate demand would boost the economy at first but slow demand and output in the following years.

The ongoing COVID-19 pandemic affects the impact of Biden’s tax changes on aggregate demand. TPC incorporated those effects in its estimates in two ways. At least initially, the pandemic may reduce the spending response, especially in areas such as travel and entertainment. Over the next several years, however, changes in aggregate demand will have a larger-than-usual effect on output because the Federal Reserve is projected to keep interest rates at very low levels regardless of any changes in tax policy.

In addition to the short-run effects on aggregate demand, Biden’s proposals would have longer-lasting effects on incentives to work and save. For some higher-income taxpayers, the proposals would increase effective tax rates on labor income such as wages or self-employment income. Lower after-tax wages would reduce labor supply and slow economic growth. However, most households would see no change in the effective tax rates on their labor income.

Although the tax proposals taken together would reduce incentives to save and invest, they would also substantially reduce federal budget deficits after 2021. (That effect on the deficit reflects only Biden’s tax proposals; to the extent the extra revenue was used to finance increased spending, effects on the deficit would be less positive). Lower budget deficits would free up funds that would otherwise be used to purchase government bonds for use in private investment activities. That effect increasingly offsets the impact of reduced saving incentives associated with higher marginal tax rates as the effects of greater revenues on the federal budget compound. Eventually this turns the net impact on aggregate private investment positive.

Overall, Biden’s many tax changes would have very little effect on the growth path of the economy. And those small economic effects would only modestly reduce the total amount of revenue his proposals would collect if enacted.

This blog has been revised to reflect changes in TPC's analysis of Biden's proposal to increase minimum taxes on foreign-source income of US firms.