Biden Would Raise Taxes Substantially for High Income Households and Corporations, Cut Taxes for Families with Children, According to A New TPC Analysis

Nearly all of President Biden’s proposed tax increases would be borne by the highest income 1 percent of households—those making about $800,000 or more—according to a new analysis by the Tax Policy Center. At the same time, Biden would cut taxes for many low- and moderate-income households and reduce them substantially for those with children. 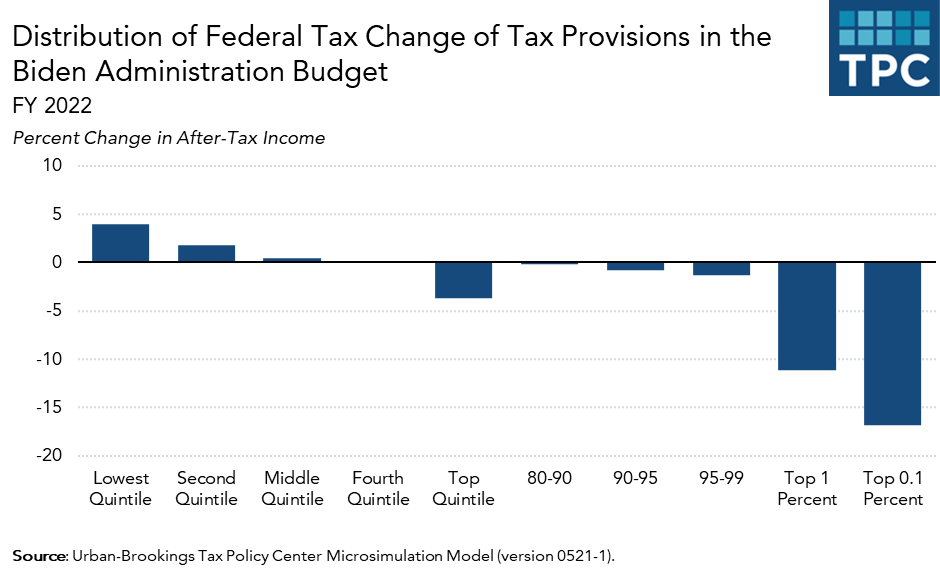 TPC analyzed the tax changes in Biden’s fiscal year 2022 budget, including proposals in his American Jobs Plan and American Families Plan—all of which were outlined in the Treasury Department’s explanation of his tax proposals, known as the Green Book.

There are many ways to look at the distribution of Biden’s tax changes. But the basic story doesn’t change much, no matter the lens.

If you look at just individual income and payroll taxes, the lowest-income households get a slightly larger increase in average after-tax incomes (since they no longer would bear the burden of the workers’ share of those corporate rate cuts). Middle-income households also would benefit from not bearing the shareholders’ slice of Biden’s corporate rate hikes.

The impact is even more dramatic for high-income households who benefit most of all as shareholders. For example, excluding their share of corporate tax would reduce the average tax increase of the top 1 percent from about $213,000  to about $174,000, or from 11 percent of after-tax income to 9 percent.

For those looking to see if Biden kept his promise to not raise taxes for those making $400,000 or less, the answer is: Mostly, but not entirely.

Unfortunately, TPC doesn’t break out the exact income levels Biden targets, but its tables do show households with income of $500,000 or less.

However, if you look just at personal income and payroll taxes, which seems a fair reading of Biden’s pledge, the story is quite different. Among those making less than $200,000, only a few thousand would pay higher taxes in 2022. Nearly all would be wealthy decedents who would pay Biden’s tax on unrealized capital gains.

Another way to look at Biden’s plan is to split households into those with children and those without.  Biden’s tax agenda is skewed heavily towards parents. For example, while all low-income households would get an average tax cut of about $620 in 2022, taxes for such families with children would plunge by an average of $3,200. This is a feature, not a bug, of Biden’s plan. But the difference is striking.

Finally, there is one more way to look at Biden’s tax agenda: How would his proposals affect various income groups in 2031?

It is helpful to think of 2026 as an inflection point. That’s because all the individual tax changes in the 2017 Tax Cuts and Jobs Act expire at the end of 2025.

Thus, tax rates would rise for many households and many business owners would lose the benefit of the TCJA’s special 20 percent deduction for pass-throughs such as partnerships. At the same time, the state and local (SALT) tax deduction and miscellaneous individual income tax deductions would be fully restored. High-income households could use those deductions to lower their taxable income and protect some or all of their capital gains from Biden’s plan to tax them at the top 39.6 per cent rate.

Biden is proposing major changes in the US tax code. And, as he has been saying for a year, they largely are split between tax cuts for families with children and tax increases on high-income households and corporations. TPC’s analysis quantifies how those tax changes affect different households.