Biden Would Raise Taxes by $4 Trillion Over 10 Years, Mostly on The Highest-Income Households

Former Vice-president Joe Biden would raise taxes by nearly $4 trillion over the next decade, about 1.5 percent of Gross Domestic Product (GDP). And nearly all the tax increases would be paid by the highest-income households, according to a new analysis by the Tax Policy Center.

The Democratic presidential hopeful would generate about half the money by raising taxes on households with incomes in excess of $400,000 and the other half by raising business taxes.

At the same time, he’d raise the corporate income tax rate from 21 percent to 28 percent. He’d increase taxes on US-based multinationals in part by doubling the minimum tax on profits earned by foreign subsidiaries of US firms, and eliminate tax preferences for the real estate industry.

TPC assumes the tax cuts would take effect in 2021. The highest-income 20 percent of households (who will make about $170,000 or more) would bear nearly 93 percent of the burden of Biden’s proposed tax increase, and the top 1 percent nearly three-quarters.

The 2021 tax changes would reduce after-tax incomes of the highest-income 1 percent of households (those making about $837,000 or more) by an average of about $300,000, or 17 percent, Tax burdens on the top 0.1 percent (who will make $3.7 million or more) would increase by about $1.8 million, on average, nearly one-quarter of their after-tax incomes.

The 2021 tax changes would reduce the after-tax incomes of middle-income people by about 0.4 percent, or $260 and reduce incomes for those at the bottom of the income distribution by about 0.2 percent, or $30. 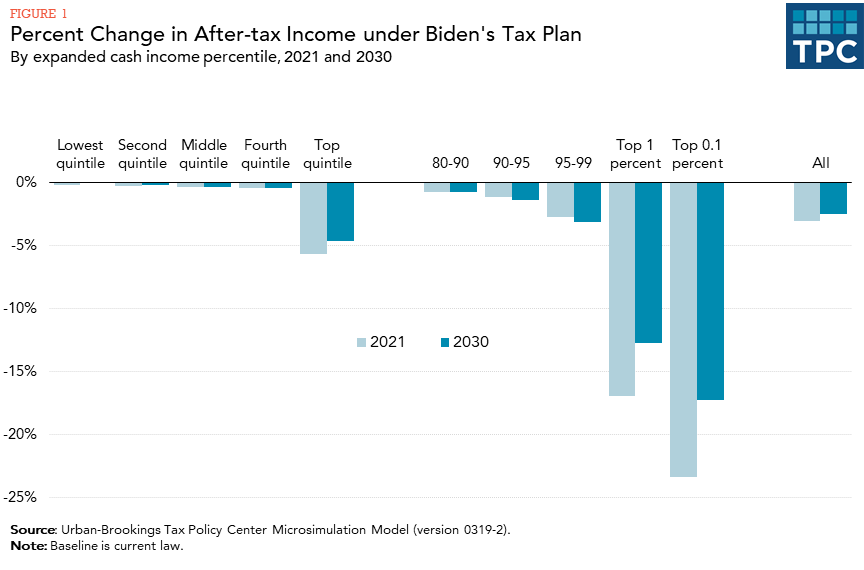 For nearly all these households, that lost income would result largely from declines in wages caused by Biden’s proposed business tax increases. TPC and other analysts distribute the corporate income tax to shareholders, other capital owners, and workers.

In the decade 2031-2040, Biden would raise taxes by about $6.2 trillion, or about 1.6 percent of GDP. The distribution of his tax increases would be similar in 2030 to 2021, though upper middle-income households would pay a bit more of their after-tax incomes in tax while the very highest income households would pay slightly less.  The overall tax increase as a percentage of after-tax income is smaller in 2030 than in 2021 because the individual tax cuts in the 2017 Tax Cuts and Jobs Act will have expired.

In sum, Biden’s plan achieves what he promises. He’d raise taxes substantially, and nearly all on high-income households. The political question will be whether voters like the idea of a $4 trillion tax hike—even if most of them would pay little or none of it.