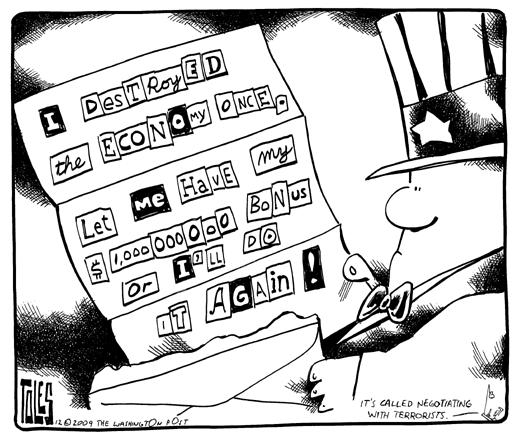 The UK recently instituted a 50% tax on bankers' bonuses and France is reportedly about to follow suit. German chancellor, Angela Merkel, is said to like the idea, but would prefer to institute a tax on financial transactions. Even economist Paul Krugman said that, at first blush, the bonus tax "looks entirely reasonable." Sure, it might drive the best and the brightest out of the finance business, but that would be a good thing.

If there were an effective way to do it, I'd love to exact revenge on the financial charlatans who wrecked our economy and extorted hundreds of billions in ransom from the feds to keep the financial sector from complete meltdown. The only problem is that the tax ideas being floated would likely do more harm than good. 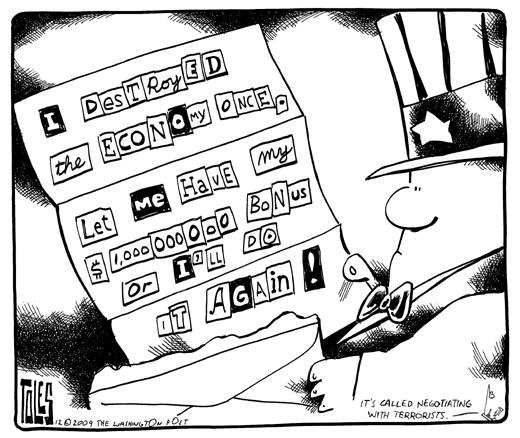 This image is copyright protected. The copyright owner reserves all rights.

I'll discuss the many problems with the financial transaction tax in another post, but let's focus on the bonus tax today.

The UK will impose a 50% tax on bankers' bonuses above about $40,000. Bankers are already looking at ways around the tax and Inland Revenue is busily trying to preempt those stratagems, but the tax is not hard to avoid. The British tax is temporary, so the simplest dodge is to postpone bonuses for a year—an imperfect escape since top income tax rates are scheduled to increase next year and the government might simply decide to make the bonus tax permanent.

However, a permanent bonus tax would surely produce a lot of undesirable and unintended tax avoidance behavior. For example, compensation could be shifted away from bonuses into base pay. Or, to escape the limits altogether, financial service executives could move offshore. In the internet age, financial transaction can be undertaken anywhere.

The United States has painful experience with the unintended consequences of limits on compensation. In 1993, we limited corporate deductions for cash salaries to $1 million, intending to encourage more performance-based pay. The result was much more use of stock options, which produced a huge reward for transactions that pay off in the short-term, as well as a strong incentive to cook the books to boost stock prices. Arguably the salary limit helped fuel the bubbles of the last two decades.

Even if the bonus tax worked, it would set a very bad precedent. Firms in different industries use numerous ways to compensate employees, ranging from fixed salaries to various forms of incentive systems, and what is most suitable varies. Government cannot possibly know how best to compensate workers in any particular firm or industry. Using the tax system to influence how firms compensate employees substitutes a rigid rule for private efforts to figure out what works best. Beyond this, imposing a tax on one form of compensation in one specific sector smacks of industrial policy—the government channeling capital into some activities and away from others. I know, we do that already through tax subsidies for many activities, but imposing a bonus tax on the financial sector seems to be a giant step forward in this very bad practice.

When markets work, it is best for government to get out of the way.

When they don't work, the best approach is to attack the distortions directly. If, as many believe, the financial system became over-leveraged, then do something to reduce excess debt. Overhaul the regulatory structure. Set adequate reserve requirements. Provide enough information so that consumers, investors, and the government can understand risk better and therefore accurately price financial instruments.

If some industries are so concentrated that companies become "too big to fail," then those companies should be charged a fee commensurate with the risk they are imposing on taxpayers and the public. That is, maybe there should be a tax on bigness, but it certainly should not be limited to the financial sector.

All of this is much harder than imposing a new tax on bankers' bonuses and it may not provide the sweet satisfaction of revenge. But carefully designed structural reforms might help prevent the next financial catastrophe, and that should be the focus of public policy.