The AHCA’s Tax Changes And Transfers Would Benefit the Wealthy, Hurt the Lowest Income Households

The House Republican health plan—the American Health Care Act (AHCA)—would provide significant net benefits to high income households but leave those with the lowest incomes worse off than they are today, according to a new report by the Urban-Brookings Tax Policy Center and the Urban Institute’s Health Policy Center.

The analysis finds that, on average, households would see almost no change in their finances if Congress replaces the Affordable Care Act (ACA) with the AHCA. However, that result masks big differences in costs and benefits among households of different incomes.

The decline in well-being for low-income people would result from the AHCA’s proposals to cut the federal contribution to Medicaid and its move to eliminate cost-sharing subsidies for lower-income households that buy non-group insurance, thus raising their deductibles and co-pays. The TPC/HPC analysis finds they’d lose more than $1,600 on average from those changes, with a small share of those costs offset by a modest $210 tax cut. 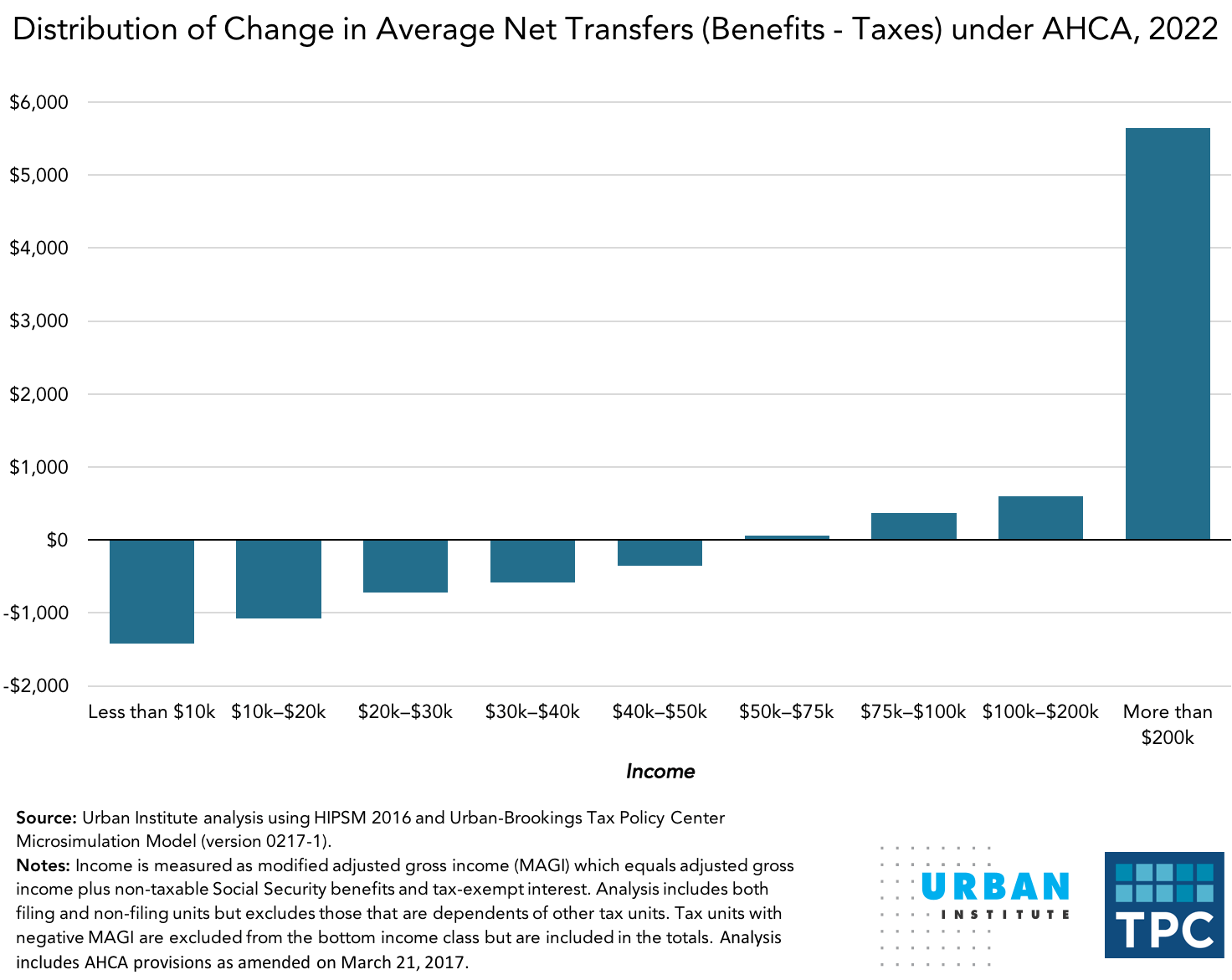 Among middle-income households, the average tax cut of about $240 would be nearly offset by a decline of about $180 in Medicaid and cost-sharing benefits.  And for those making $200,000 or more, nearly all of the benefit comes from the big tax cuts.

The new analysis looks at both the Medicaid provisions and the broad range of taxes and subsidies under both health laws. It includes repeal of the ACA’s tax increases and the AHCA’s changes to coverage-related penalties and premium subsidies. For example, the study looked at the AHCA’s provisions to replace the ACA’s income-related tax credits for buying insurance and its tax penalties for those without coverage with the House GOP’s largely age-based subsides for buying insurance.

Last week, TPC analyzed the effects of the House GOP’s proposed repeal of the ACA’s tax increases. That analysis looked at provisions such as repeal of the Net Investment Income Tax and the Medicare surtax for high-income households, excise taxes on health related industries, tax penalties on individuals without insurance coverage and employers that do not offer insurance, and the proposal to delay the Cadillac tax on high-cost employer-sponsored coverage. However, that analysis excluded changes in Medicaid or cost-sharing requirements for those with insurance, and the AHCA’s age-related credits.

Today’s report shows the effects of the AHCA changes in 2022, when most of the law would be fully effective. It is based on the House GOP’s initial March 6 proposal and most of the changes announced by the House Republican leadership on March 21. One final caveat: Unlike typical TPC analyses, this one uses a measure of modified adjusted gross income rather than TPC’s broader expanded cash income, which includes the value of employer benefits and other sources of income. To see how the distribution of tax benefits looks using standard TPC tables, click here.