As Congress struggles to pass the Build Back Better bill, some congressional Democrats are exploring new proposals to raise the $10,000 cap on the state and local tax (SALT) deduction. These would increase the deduction limit to $25,000 for all taxpayers or, alternatively, raise the cap to $25,000 only for those making $400,000 or less.

A new Tax Policy Center analysis shows that, like earlier ideas, these options would primarily benefit those making more than $250,000-a-year and do almost nothing for middle-income households. However, they’d be less regressive than the House plan to raise the cap to $80,000. And they’d cost substantially less. 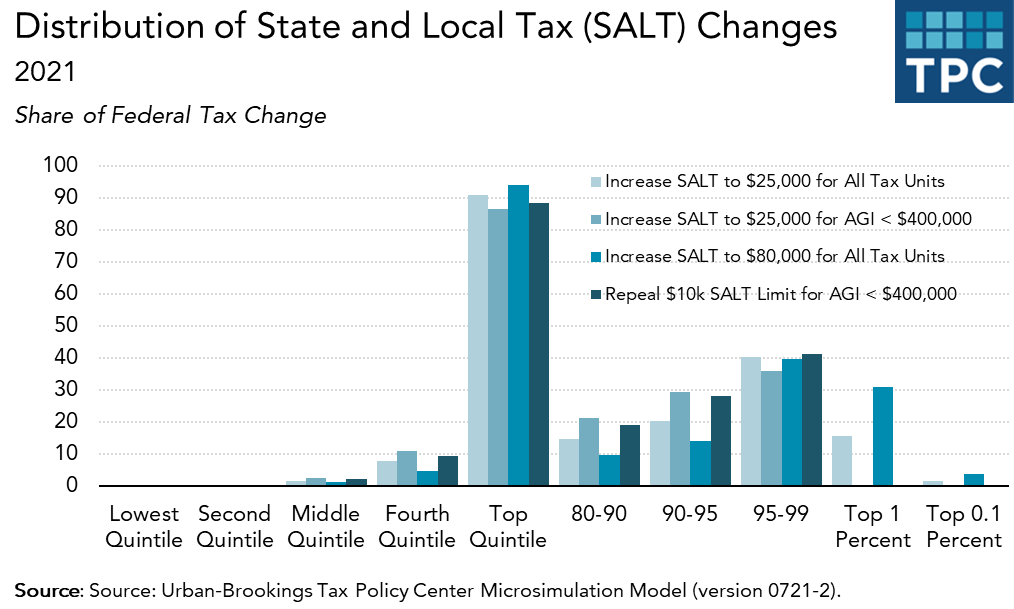 Increasing the cap to $25,000 for all would reduce taxes by an average of about $150, or about 0.2 percent of after-tax income, according to TPC.

Raising the cap to $25,000 but phasing out the relief for those with Adjusted Gross Income of $400,000 or more would be somewhat less generous for high-income households. However, the top 10 percent of households still would receive about two-thirds of the benefits and the top 5 percent about 36 percent. Middle-income households would get slightly more than 2 percent of the tax cut.

Middle-income households get such a small benefit because so few itemize. While SALT cap relief might encourage a few to become itemizers, most have potentially deductible expenses well below the standard deduction ($25,100 for joint filers in 2021). Thus, they are indifferent to a higher SALT cap that applies only to itemizers.

The real difference in the two plans is at the very top of the income distribution. With an across-the-board $25,000 cap, the top 1 percent—those making nearly $4 million or more--would get an average tax cut of about $4,000. If the relief phases out at $400,000, they’d effectively get nothing.

The benefits for high-income households of the $25,000 cap-for-all option would be limited by the Alternative Minimum Tax and this version would throw about 25,000 more households on to the AMT.  Limiting cap relief for those making more than $400,000 would add few to the AMT rolls.

Since no formal proposals of either of these ideas has yet surfaced, TPC assumed a cap of $25,000 for all filers except married couples filing separately, who would each have a cap of $12,500. TPC also assumed the second version would phase out the additional deduction for incomes between $400,000 and $500,000.

Another version suggested by Senator Bernie Sanders (I-VT), would repeal the cap for those making less than $400,000. The top 10 percent of households would get about 70 percent of the benefits, the top 5 percent would get about 40 percent, and middle-income tax filers only about 2 percent. The 95th to 99th income percentile group would get an average tax cut of about $2,400 and middle-income households still would receive only about $20 on average.

Democrats remain in a political and policy bind. They need to ease the current cap to protect House members who represent wealthy districts in high-tax states. Yet, any plan that provides only SALT cap relief inevitably benefits high-income households and does little or nothing for those with low- or moderate-incomes.

Ideas such raising the cap to $25,000 for those making $400,000 or less still are poor tax policy. But they are less poor than most other options we’ve seen so far.