The tax outline unveiled this week by President Trump and the congressional Republican leadership would reduce federal revenue by $2.4 trillion over the next decade, according to a new analysis by the Tax Policy Center. The plan would cut taxes for low- and middle-income households modestly, while focusing most of its benefits on the highest-income 1 percent.

President Trump has promoted the tax package, called the “Unified Framework for Fixing our Broken Tax Code,” as an historically large tax cut for the middle-class and a tax increase for the highest-income households. The reality, however, is quite the opposite.

The top 1 percent (those making $730,000 or more) would receive half of all the plan’s tax cuts while middle-income households (those making between about $50,000 and $90,000) would get only about 8 percent of the total benefit. 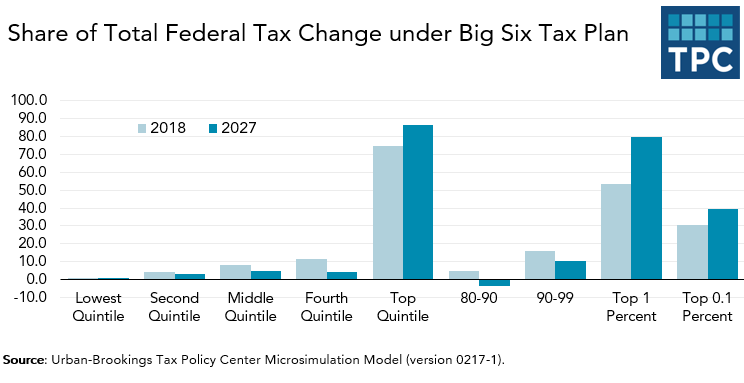 Overall, individual income taxes would increase under the framework while business taxes would decline, making this proposal a mirror image of the 1986 tax reform, which raised taxes on business to help finance tax cuts for individuals.

Very high income taxpayers would benefit primarily from the framework’s proposed cuts in corporate taxes and, especially, pass-through businesses. The Big Six would cut the corporate tax rate from 35 percent to 20 percent, and the tax rate on pass-throughs such as partnerships from 39.6 percent to 25 percent. The plan would also reduce individual income tax rates, repeal the Alternative Minimum Tax and the estate tax, and eliminate many itemized deductions.

But not everyone would win. In 2018, about one in seven middle income households would pay an average of $1,000 more in taxes under this plan. By 2027, more than one of every four middle-income families would pay more in taxes. Upper middle-income households, those making between $155,000 and $305,000, would receive small tax cuts in 2018 but see their taxes rise slightly in 2027, mostly due to the loss of itemized deductions such as those for state and local taxes. By 2027, half of that income group would be paying higher taxes.

The overall plan would reduce federal revenue by $2.4 trillion from 2018-2027 and by another $3.2 trillion over the following decade, according to the TPC analysis. But that assumes that Congress eliminates all itemized deductions except for mortgage interest and charitable giving, ends personal exemptions, repeals many business tax preferences, and changes the way it indexes the tax code so people pay higher taxes as their income increases with inflation.

To the degree that lawmakers succumb to political pressure to preserve those provisions, either the cost of the plan would rise or Congress would have to scrap some of its tax cuts.

In an era of rising populism, the Big Six’s tax framework is a major tax cut for businesses and the very highest income Americans and only a small tax cut for middle-income households. Seeking to balance the demands of their dueling business and working class constituencies, President Trump and the congressional Republican leadership have tilted heavily towards traditional GOP business interests.