Income inequality has increased sharply over the past 35 years. What role has the federal tax system played in creating—or reducing—inequality?

A simple way to measure inequality is by looking at the share of income received by the highest-income people. Using a broad measure that includes labor, business, and capital income; government cash payments (such as Social Security); and the value of in-kind benefits from government programs (such as Medicare and Medicaid), the Congressional Budget Office finds that the income share of the top fifth of the population rose from 43 to 53 percent between 1979 and 2013 (figure 1). This increase in income inequality came about despite the growth in Social Security, Medicare, and Medicaid, which provide the greatest boost in before-tax income to low- and middle-income households. 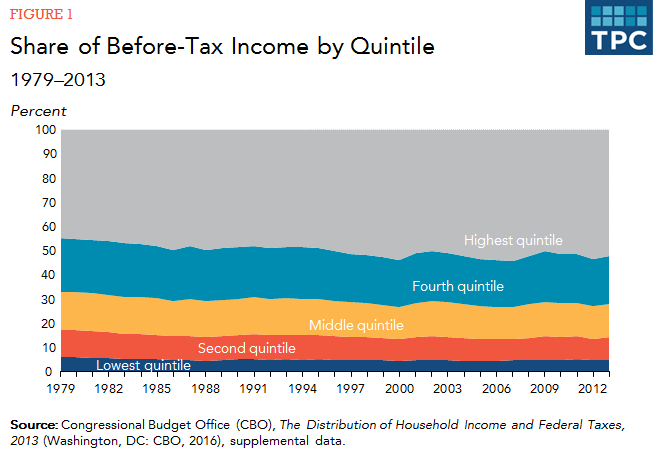 Much of the gain in the top income share went to the top 1 percent of the population. In 1979, they received 9 percent of all income. By 2013, their share grew to 15 percent, more than all the income received by the bottom 40 percent (figure 2). The income measure used in figures 1 and 2 includes realized capital gains, which are sensitive to business cycle fluctuations and to changes in tax rates. Because realized capital gains are a significant income component for the top 1 percent, their income share is more volatile than income shares of other groups. 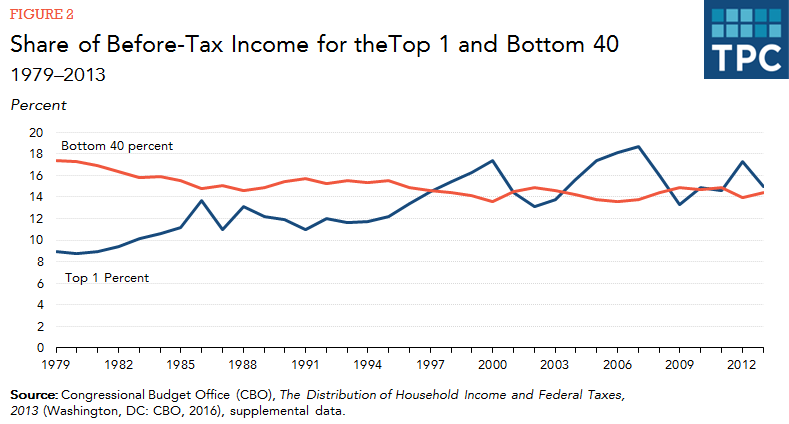 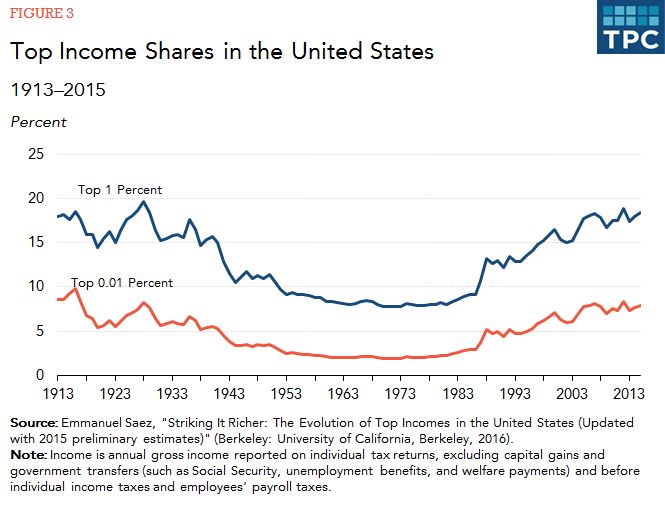 The United States is not the only country with increasing income inequality. Most member countries of the Organisation for Economic Co-operation and Development have experienced the same phenomenon, though to a lesser degree than the United States (figure 4). 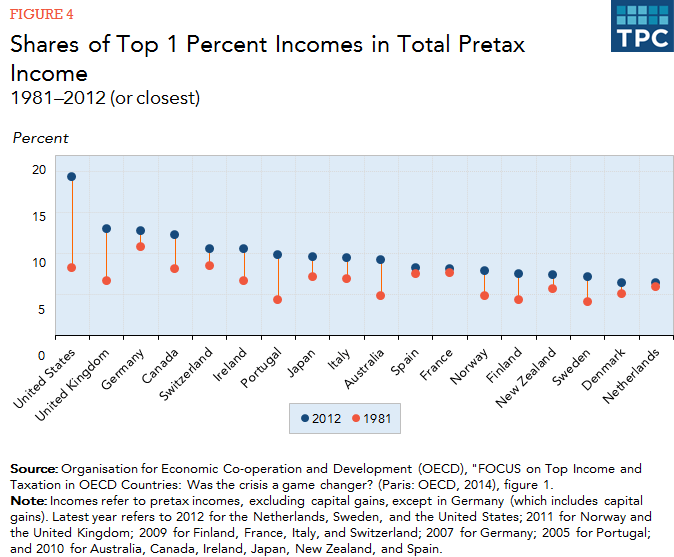 The Role of Taxes

The figures so far only consider income before taxes. What happens after we account for taxes? 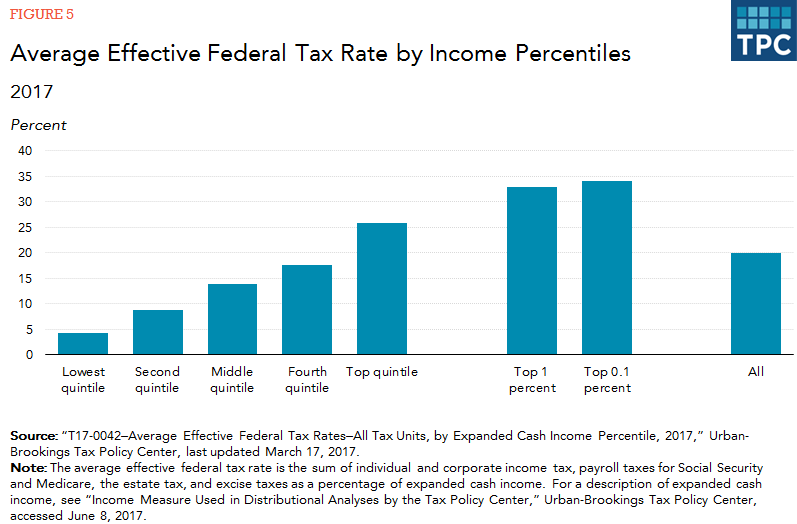 Because federal taxes are progressive, the distribution of after-tax income is more equal than income before taxes. High-income households have a slightly smaller share of total income after taxes than their share of income before taxes, while the reverse is true for other income groups (figure 6). 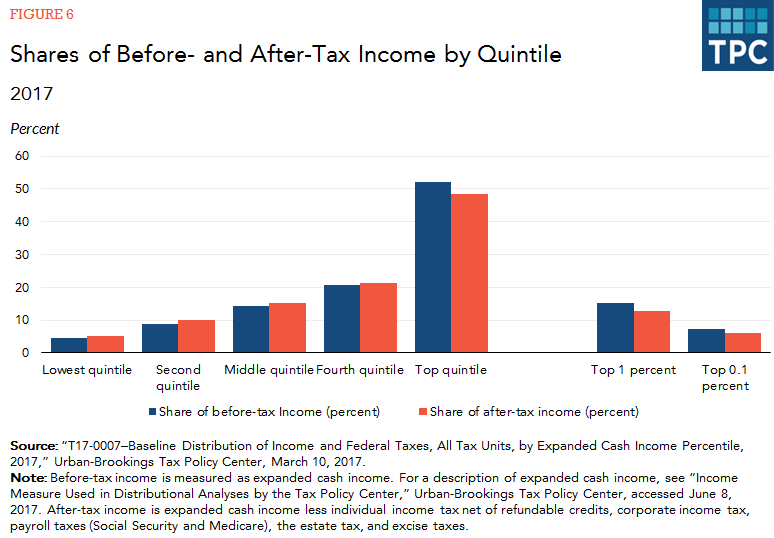 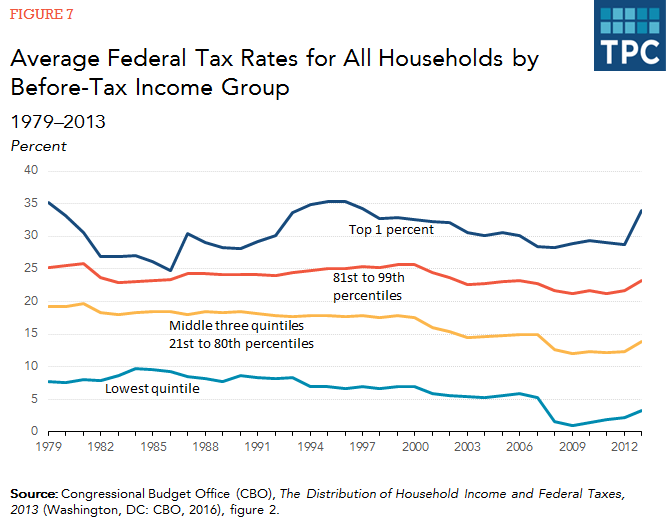 Effect of Taxes on Income Inequality

A more progressive tax system would reduce income inequality if nothing else changes. But while federal taxes became more progressive, they also were shrinking relative to before-tax income starting in 2001, thanks to tax cuts during the administrations of George W. Bush and Barack Obama. A lower average tax rate offset the equalizing effect of increased tax progressivity, leaving the effect of federal taxes on income inequality little changed.

A widely used measure of income inequality is the Gini index. The index has a value of zero when income is distributed equally across all income groups and a value of one when the highest income group receives all the income. By this measure, inequality has been consistently lower for after-tax income than for before-tax income (figure 8). 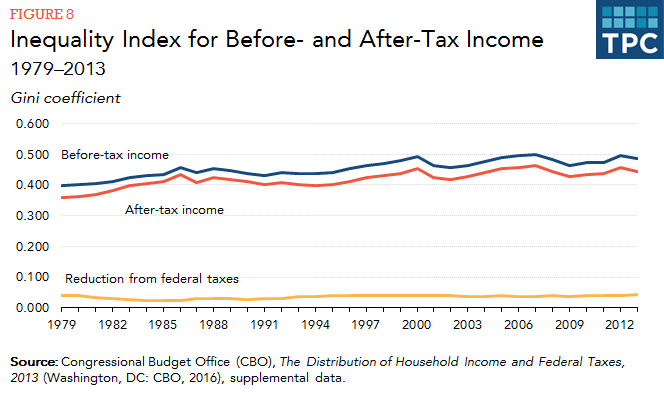 The gap between the index for before-tax and after-tax incomes measures how much taxes reduce inequality. The bigger the difference, the more taxes equalize income. The gap closed during the 1980s as taxes relative to income fell more for high-income households than for low-income groups. But as federal taxes became more progressive starting in the 1980s, the gap between before-tax and after-tax income inequality widened. It remains at roughly the pre-1980 level.