The vast majority of US businesses are pass-through entities, such as sole proprietorships, partnerships, and S corporations. Unlike C corporations, these firms are not subject to the corporate income tax. Instead the owners include their share of profits as taxable income under the individual income tax, which is taxed up to the maximum rate of 39.6 percent.

Pass-through businesses generally face the same tax rules as C corporations for inventory accounting, depreciation, and other provisions that measure business profits. But organizing as a pass-through business has several advantages. The first is that income is subject to a single layer of income tax at the owners' rate. In contrast, profits of C corporations are taxed twice: at corporate income tax rates of up to 35 percent and at rates of up to 23.8 percent when paid out as dividends or when shareholders sell stock and realize capital gains.

Pass-through status also allows individuals to deduct business losses against income from other sources, subject to some limitations for passive losses. In contrast, C corporation losses can only offset income earned inside the corporation. However, C corporation losses may be carried back for up to 2 years or carried forward for up to 20 years, and they may be deducted against business profits in previous or future years.

Sole Proprietorships: A business with a single owner does not file a separate tax return, but rather reports its net income on Schedule C of the owner's individual tax return. Generally all net income from sole proprietorships is also subject to payroll taxes under the Self Employed Contributions Act (SECA).

Partnerships: Partnerships file an entity-level tax return, but profits are allocated to owners who report their share of net income on Schedule E of their individual tax returns. Under check the box regulations instituted by the Treasury Department in 1997, limited-liability companies can elect to be taxed as partnerships. General partners pay SECA tax on all their net income, while limited partners are subject to SECA tax only on compensation for their labor.

S Corporations: These firms file a corporate tax return, but profits flow through to their shareholders' personal income tax retruns. S corporations cannot have more than 100 shareholders, who must be US citizens or residents or certain estates, trusts, and tax-exempt organizations. S corporation owners do not pay SECA tax on their profits, but they are required to pay themselves reasonable compensation, which is subject to the regular Social Security and Medicare payroll tax.

The share of business activity represented by flow-through entities has been rising since the passage of the Tax Reform Act of 1986. Sole proprietorships, by far the most common type of business, accounted for 72 percent of all businesses in 2012 but received just 4 percent of total business revenue. More than 80 percent of all other businesses were organized as pass-throughs in 2012—up from 49 percent in 1985 (figure 1). During that period, the share of business receipts going to pass-through entities increased from 9 percent to 36 percent (figure 2). 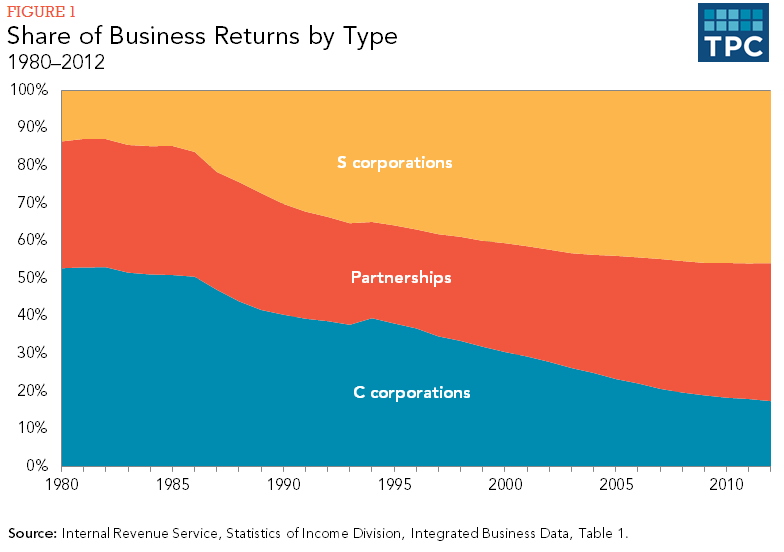 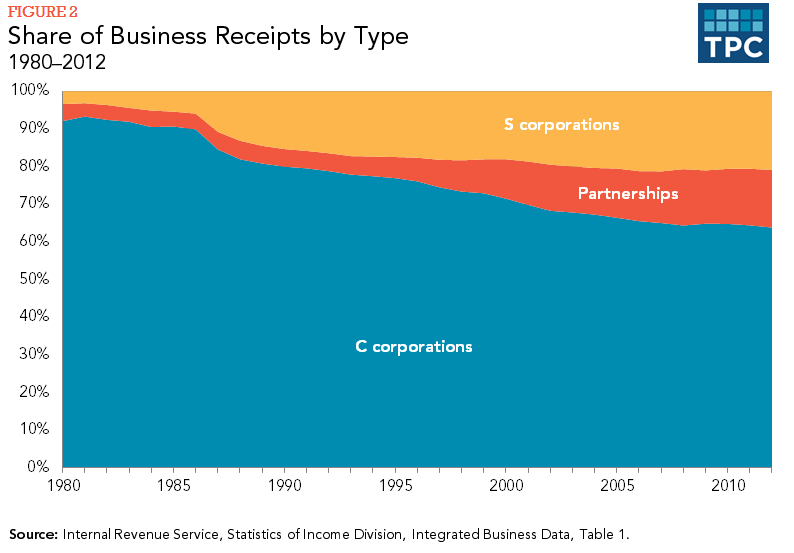 Many of these taxpayers don't have businesses at all. Rather, they may receive occasional income from the rental of a vacation home, or from the sale of odds and ends on eBay, that they report as business income. A 2011 Treasury study estimated that only about half of those who filed a sole proprietorship tax return really ran a business.

By contrast, upper-income taxpayers receive the bulk of business income from pass-through enterprises. Households making $200,000 or more account for nearly 80 percent of business income reported on individual income tax returns, and those making $500,000 or more accoutn for 60 percent. Among those making $1 million or more, 80 percent report business income averaging more than $810,000, and more than 25 percent generate at least half their adjusted gross income that way. This high-income group is made up of doctors, lawyers, consultants, other professionals, and, at the very highest end, partners in hedge funds or other investment firms.

Proposals to Change the Taxation of Pass-Through Businessess

To stem such tax avoidance, both plans include unspecified provisions aimed at preventing people from gaming the new rate structure. However, even current rules are very difficult to enforce, and the much larger rate differential under the Trump and House GOP plans would result in greater tax avoidance.

The recent experience in Kansas illustrates this problem. In 2012 the state reduced its income tax rates and completely eliminated income taxes for pass-through businesses. The state expected that 191,000 taxpayers would benefit from the pass-through provision, but almost 400,000 filers claimed the exemption—a major contributing factor to the $700 million decrease in personal income tax revenue.