There are several types of tax-favored retirement plans. They differ mainly on the type of sponsor and the tax treatment of contributions and distributions. Almost all workers are eligible to participate in these plans, but only half actually do. High-income taxpayers participate much more than low-income taxpayers.

In general, defined benefit and defined contribution plans are tax-deferred, meaning that neither the employer nor the employee pays tax on the initial contributions or the accumulations. However, employees generally pay tax when they withdraw funds. (The major exception is Roth-type defined-contribution plans, where employees are taxed when they contribute to their accounts rather than when they withdraw funds after retirement. See further discussion below, which compares Roth and traditional plans.)

Some employers, most frequently public ones, offer “defined-benefit” plans, which provide retired employees annuity payments, typically based on their years of work and earnings.

The employer bears the risk of making the annuity payments for the retiree’s lifetime. If retired employees live longer than anticipated, or if the investments financing the employees’ pensions fail to meet expectations, the employer must increase its contributions to make good on the promised benefits. Defined-benefit plans are thus more likely to be offered by large employers, which are better suited to bear these risks and can spread administrative costs across large numbers of participants.

However, the government and the employees themselves also may bear some risk. Defined-benefit plans are insured by the Pension Benefit Guarantee Corporation (PBGC), a federal entity that ensures retired employees receive at least some benefits if their former employers fail to pay the promised sums in full. However, the PBGC’s financial condition is uncertain, and it may not be able to meet its obligations to retirees whose employers do not pay full promised benefits.

Over the past few decades, many private employers have moved away from defined-benefit plans. From 1991 to 2015 the share of full-time employees at medium- and large-size establishments with such plans fell from 59 percent to just 25 percent. Defined-benefit plans, however, still remain the most common type of plan for government employees.

Unlike defined-benefit plans, the owners of defined-contribution plans bear the risk if account assets underperform or if the owners outlive the income their accounts generate. Employees can manage this risk by using plan assets to purchase annuities at retirement.

Broadly speaking, there are two types of tax-favored individual retirement accounts (IRAs): traditional IRAs, which are “front loaded,” and Roth IRAs, which are “back loaded.” With front-loaded accounts, contributions are tax-deductible, but withdrawals are taxed. In back-loaded accounts, contributions are not tax-deductible, but accruals and withdrawals are tax exempt. In both versions, investment returns on account assets (accruals) are untaxed.

Which is a better deal? That mainly depends on the difference between individuals’ tax rates during their working years and during retirement. Individuals who pay higher tax rates while they are working than during retirement benefit more from front-loaded accounts because the original contributions are deducted against higher rates and withdrawals are taxed at lower rates. By contrast, someone who expects to be in a higher tax bracket in retirement would benefit more from a back-loaded account.

However, if tax rates during working years and retirement are the same, front- and back-loaded accounts generate the same after-tax return.

Take, for example, an individual who faces a 25 percent tax rate when making both contributions and withdrawals, makes a before-tax contribution of $2,000, earns 5 percent per year, and withdraws all funds after 10 years.

In a front-loaded account, she would contribute the full $2,000. The account would accumulate interest, and after 10 years the balance would be $3,258. Upon withdrawal, she would pay $814 in taxes, leaving net retirement assets of $2,443. With a back-loaded Roth-type account, she’d pay a 25 percent tax on $2,000 in income, leaving just $1,500 to contribute to her account. With the same 5 percent return, her balance would grow to $2,443. But because she’d owe no taxes on withdrawal, her after-tax proceeds would be the same $2,443. 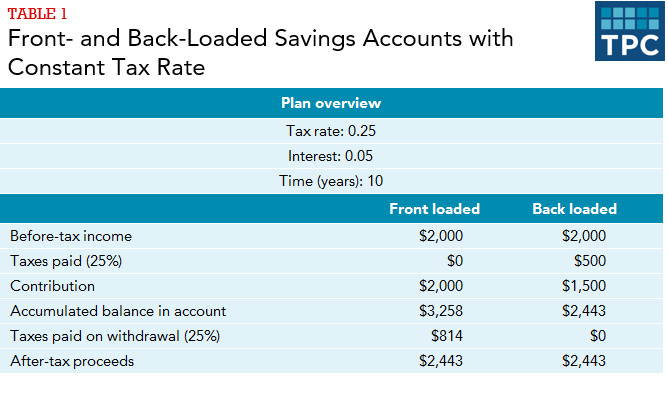 Table 2 shows what would happen to the same account if the tax rate decreases from 25 percent during working years to 20 percent during retirement. In that case, the front-loaded account would accrue $163 more than the back-loaded version, because lower taxes would be imposed upon withdrawal. Of course, the reverse occurs if the tax rate is higher during retirement than during working years. 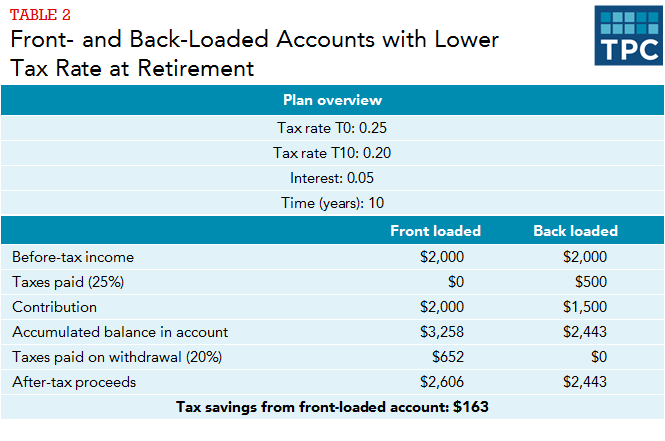 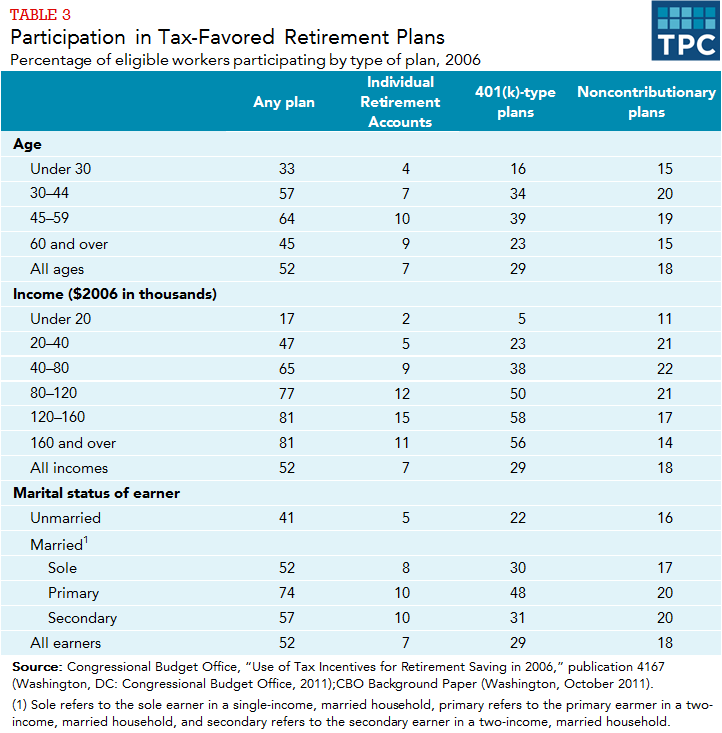 Participation rates in traditional IRAs also increase with income. However, the relationship between participation and income is less straightforward for Roth IRAs, which limit eligibility to those with adjusted gross incomes under $193,000 (for married workers in 2015).

Among those with traditional IRAs, 45 percent maxed out their contributions in 2014, with a significantly higher proportion of high-income taxpayers hitting the limit. Among those with Roth IRAs, 34 percent contributed the maximum amount, with higher-income taxpayers doing so more frequently. This pattern illustrates one reason why proposals to increase the maximum tax-favored IRA contribution would disproportionately benefit the affluent. By contrast, to shift greater incentives to low- and middle-income households, proposals could expand access to savings vehicles and scale back deductions. 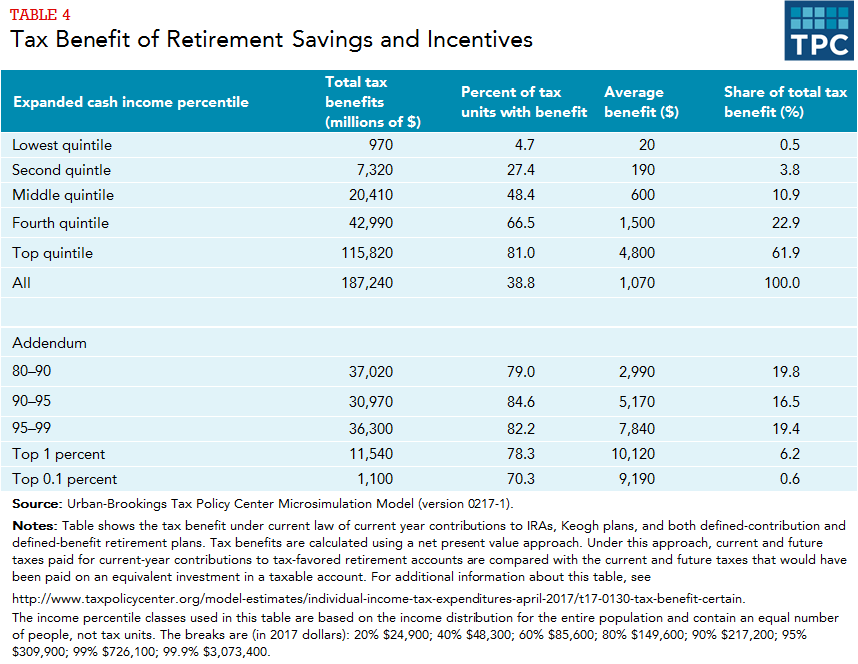 Understanding the Maze of Recent Child and Work Incentive Proposals