How States Restrict Revenues and Spending

Tax and expenditure limits (TELs) are self-imposed restrictions that state governments create to restrict the amount they can tax or spend. States can impose a fixed dollar cap on revenue or appropriations; limit growth to match increases in population, inflation, personal income; or some combination of the two. States often adopt TELs to constrain government growth, but research is mixed on whether TELs meet their goals. The effectiveness of TELs depends in part on their characteristics and stringency.1 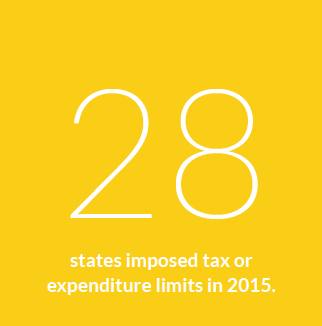 States design TELs in different ways and with varying degrees of strictness. State TELs can vary in mechanism and stringency.

Some states have also adopted limits on local property taxes, such as Proposition 13 in California and Proposition 2 ½ in Massachusetts. Although these provisions do not directly affect state revenues and we exclude them from our count of state TELs, they can affect state budgets indirectly by reducing local funding for services such as K–12 education.

Do Tax and Expenditure Limits Work?

Early studies from the 1990s suggested that TELs have little effect on state taxes or spending. However, many of those studies failed to account for variation in TEL design or stringency, used limited datasets, or did not employ robust methods of quantitative analysis. More recent and methodologically robust research finds that TELs can effectively constrain government growth under certain circumstances.

Colorado’s Taxpayer Bill of Rights restricts state and local revenue growth to the rate of inflation or population growth. Excess revenues must be returned to taxpayers rather than saved or spent on public services.

One rigorous 1996 study, for example, found that TELs requiring a legislative supermajority or popular vote to modify spending lead to a 2 percent reduction in state general fund expenditures. Those savings, however, are offset in part by higher local spending. Research has also found that TEL design matters. A 2010 50-state study on state and local spending between 1972 and 2000 found that TELs adopted through citizen referendum are more effective at constraining government growth than those adopted by legislatures.

Importantly, lower spending and revenues may not produce desirable fiscal or economic outcomes. TELs have been tied to structural deficits and higher borrowing costs and may not ultimately have a positive impact on economic growth.

Major studies on TELs have found that

Which States Limit Taxes or Spending?

As of 2015, 28 states had a TEL. Limits can be placed on revenue, appropriations, or both. Typically, states limit the ability to appropriate or spend funds rather than limit revenue collected. In 2015, 23 states limited only spending, although 11 of those required a supermajority to raise revenues. By contrast, only three limited revenue alone. Two states limited both. Twenty-two states and the District of Columbia had no TEL, but three of those states required a supermajority vote to raise revenues.

When Did TELs Become Popular?

Most TELs emerged during the “tax revolt” of the late 1970s or the economic recession of the early 1990s. Although many of the best-known local property tax limits, such as California’s Proposition 13, were adopted through citizen initiatives, most TELs originated in state legislatures. As of 2015, only nine states had passed state TELs through voter initiatives. 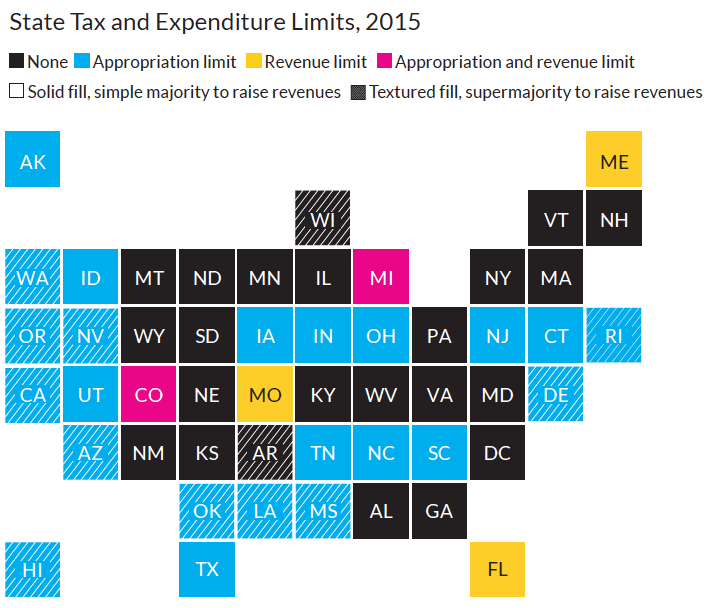 Note: This figure excludes Illinois’ temporary appropriations limit, which was only in effect from 2012 to 2015.