Fluctuations in state revenue, especially unexpected ones, can compromise state services and contribute to overall fiscal instability. Although the business cycle is partially responsible for swings in revenue collections, state tax and budget policies also contribute to volatility.1 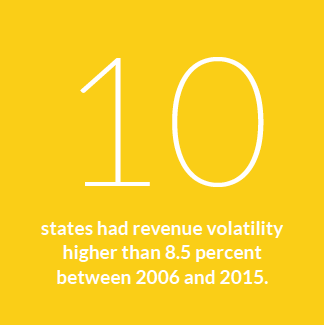 Rising volatility in state tax collections has made it difficult for some states to accurately forecast revenues.

Research from 2014 found that revenues from the corporate and personal income tax, which are tightly linked to stock market performance, have become more volatile since 2001.

In general, the corporate income tax tends to be the most volatile source of tax revenue; the personal income tax, which includes the highly unpredictable capital gains tax, is a close second. Research on revenue volatility points to the following underlying causes:

What steps can states take to reduce revenue volatility? One 2011 study concluded that it will be difficult to reduce revenue forecasting errors simply by shifting the revenue mix to less-volatile revenue sources. The following actions can help:

States with the most volatile revenues include Alaska (which is highly dependent on severance taxes from oil, gas, and minerals) and California (which derives significant revenue from its personal income tax, which is very volatile because California residents earn significant income from capital gains and stock options). States with low revenue volatility include South Dakota and Kentucky, both of which depend more heavily on sales tax streams. 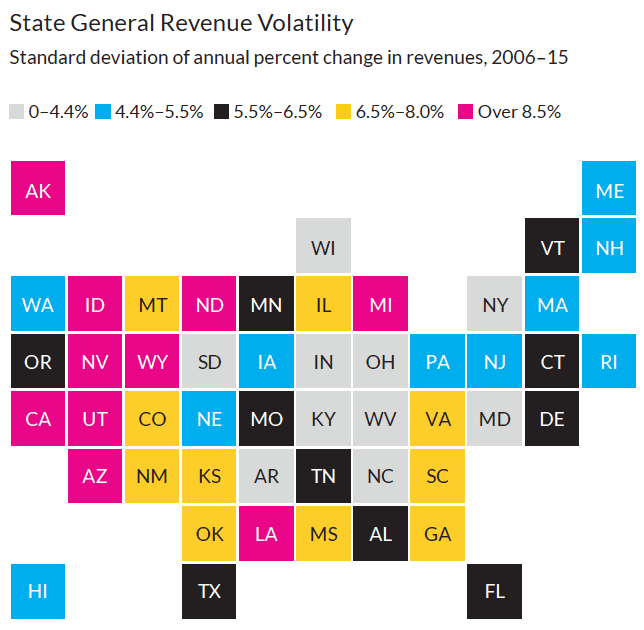 Note: Volatility is defined as the standard deviation of the annual percent change in revenues between 2006 and 2015 (from Donald J. Boyd and Lucy Dadayan, State Tax Revenue Forecasting Accuracy: Technical Report [Albany, NY: Nelson A. Rockefeller Institute of Government and Pew Center on the States]). Data exclude the District of Columbia and include only general fund revenues.