States use different methods to estimate how much revenue they will have available to spend in future years. States that do not produce timely or detailed revenue estimates may experience unexpected deficit shocks or contribute insufficient resources to their state budget stabilization fund to weather downturns in future years. Recent recommendations to improve forecasting include measures for transparency, independence, and multistakeholder inclusion.1 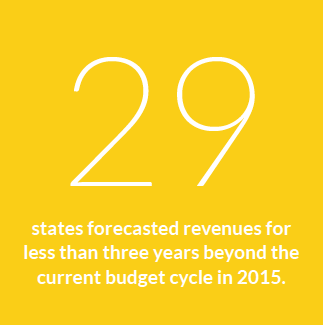 Revenue forecasts can be produced by the executive branch or legislative branch or they can be outsourced to academics or economic consultants. In 2015, 31 states and the District of Columbia had a formal revenue estimating group. In eight states, the executive budget agency was solely responsible for preparing the revenue forecast for the governor’s budget; in another eight, an independent board or commission was responsible. In 28 states, multiple agents were involved in preparing the governor’s forecast, including in some cases the governor’s office itself or the legislature. Half of all states use consensus forecasting.

In some states, the executive and legislative branches produce competing forecasts. In Colorado, for example, both the executive Office of State Planning and Budgeting and the Legislative Council produce separate revenue forecasts that the Joint Budget Committee chooses between when balancing the budget.

Although some states centralize forecasting responsibility with the executive branch budget office, others employ a multibranch, consensus-based process.

Although the consensus process has been popularly touted as a way to reduce forecasting errors, one 2011 study did not find a clear link between consensus forecasting and accuracy.

Forecasting errors are more likely to be caused by a recession and to occur in smaller states that rely heavily on revenues from only a few sectors of the economy or specific revenue instruments. Alaska, for example, relies heavily on volatile revenue from natural resource extraction.

Accuracy, however, may not be the only outcome of interest. Even if research is unclear on whether consensus forecasting reduces errors, researchers praise its ability to “smooth” the budget process by depoliticizing revenue estimation and ensuring that everyone has agreed to the same numbers. A case study of Indiana suggested that the accuracy of revenue estimates is less important than whether the estimates are accepted by all the stakeholders who will ultimately use them.

How Many Years Ahead Do States Forecast? 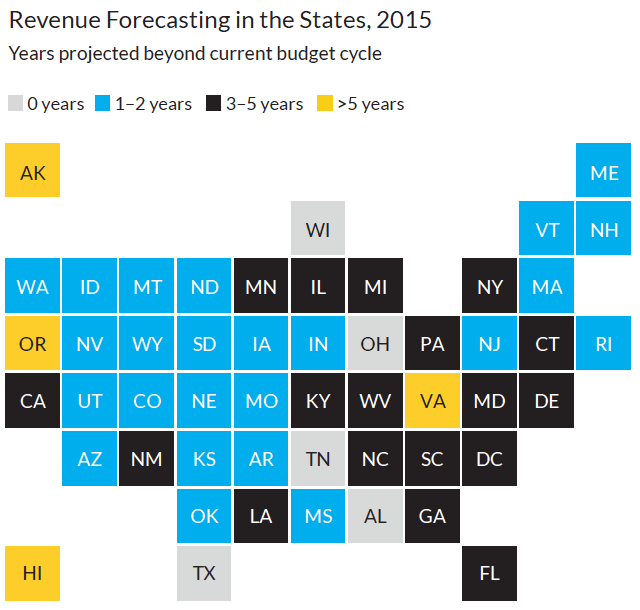