Most tax credits are nonrefundable, but some—including the earned income tax credit (EITC) and a portion of the child tax credit (CTC)—are fully or partially refundable. The most widely claimed refundable credits are the EITC and the CTC. Together, they substantially help low- and moderate-income families. Using the Supplemental Poverty Measure—which includes tax credits in assessing a person’s poverty status—analysts found that the EITC and the CTC reduced the poverty rate of working-age families more than any other government transfer program in 2015. Overall, only Social Security lifts more people out of poverty.

The EITC provides substantial support to low- and moderate-income working parents, but very little to workers without qualifying children (often called childless workers, though they may have noncustodial children, nondisabled children over 18 and not in college, or nondisabled children over 24). Workers receive a credit equal to a percentage of their earnings up to a maximum credit. Both the credit rate and the maximum credit vary by family size, with larger credits available to families with more children. After reaching its maximum, the credit doesn’t change until earnings reach the phaseout range. At that point, it declines with each additional dollar of income until it disappears entirely (figure 1).

Families with children receive much larger credits than families without qualifying children. In 2017, the maximum credit is $3,400 for a family with one child, $5,616 for those with two children, and $6,318 for those with three or more children. In contrast, childless workers can receive no more than $510, and then only if they are over 24 and under 64 (restrictions that do not apply to workers with children). And they get no EITC if their income exceeds $15,010 ($20,600 if married), while workers with three or more children can have incomes as high as $39,617 ($45,207 if married) before they lose their entire credit. Although workers without custodial children account for 25 percent of tax returns claiming EITC, they get only 3 percent of EITC benefits. Many congressional proposals have called for increasing the EITC for childless workers, either by raising the maximum credit or by expanding the ages of eligibility. 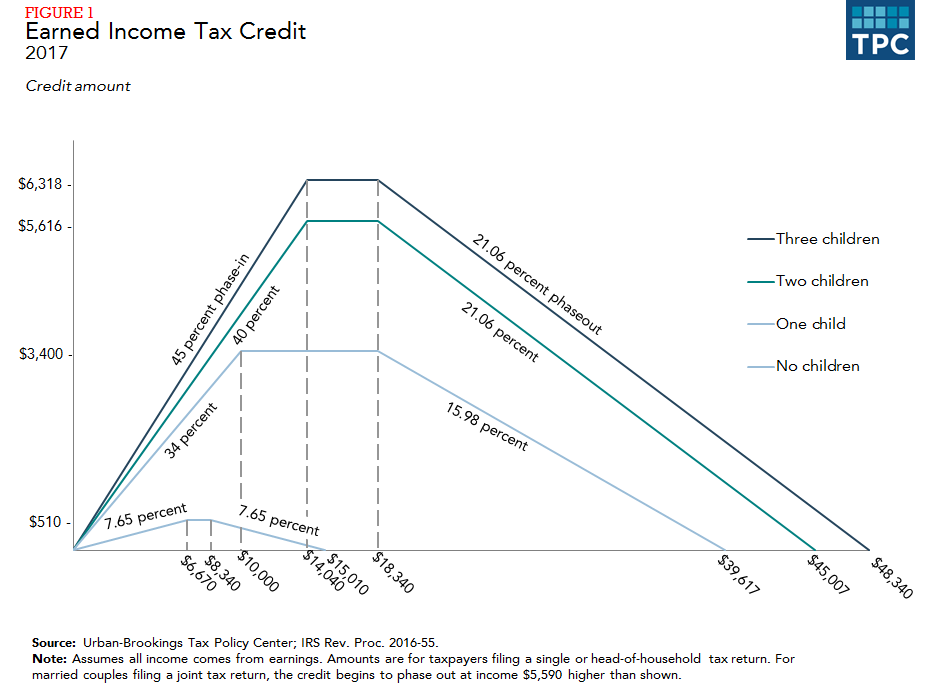 In 2016, the EITC distributed about $64 billion to 26.4 million working families. Almost all EITC benefits accrue to workers in the lowest 40 percent of the income distribution (figure 2). 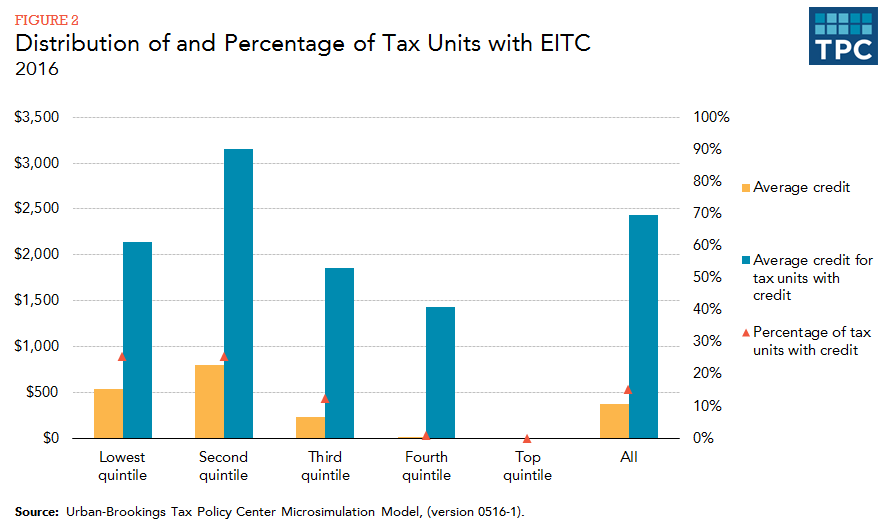 The CTC provides a credit of up to $1,000 for each child younger than 17. The credit is reduced by 5 percent of adjusted gross income over $75,000 for single parents (or over $110,000 for married couples who file joint tax returns) (figure 3). If the credit exceeds taxes owed, taxpayers can receive some or all of the balance as a refund, known as the additional child tax credit (ACTC) or the refundable CTC. The ACTC is limited to 15 percent of earnings above $3,000. 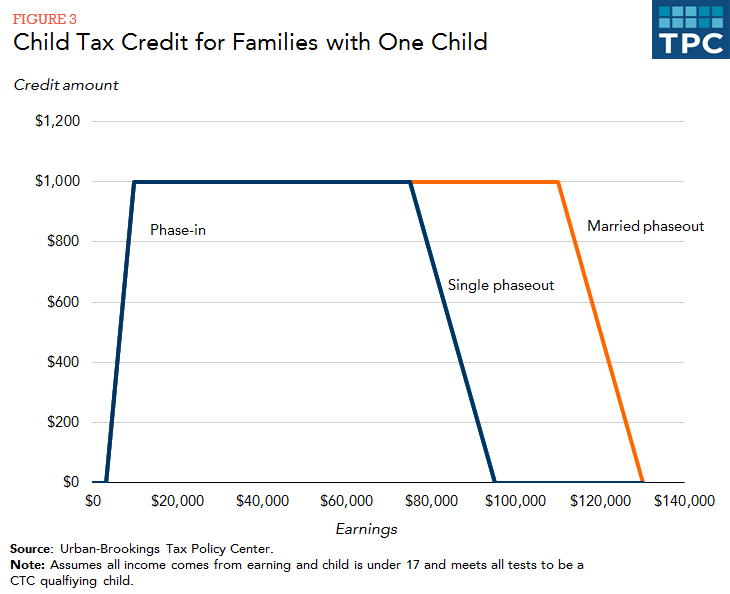 CTC rules mean that many families cannot get the full $1,000 credit per child. Those with earnings under $3,000 cannot get any ACTC, while others have too little earnings to get the full credit. TPC estimates that in 2017, 10.4 million children live in families with at least one worker but get less than the full CTC. At the other end of the income distribution, the credit’s phaseout keeps higher-income families from getting the full CTC: TPC estimates that 16.1 million children are in families whose high income will keep them from getting the maximum CTC in 2017. 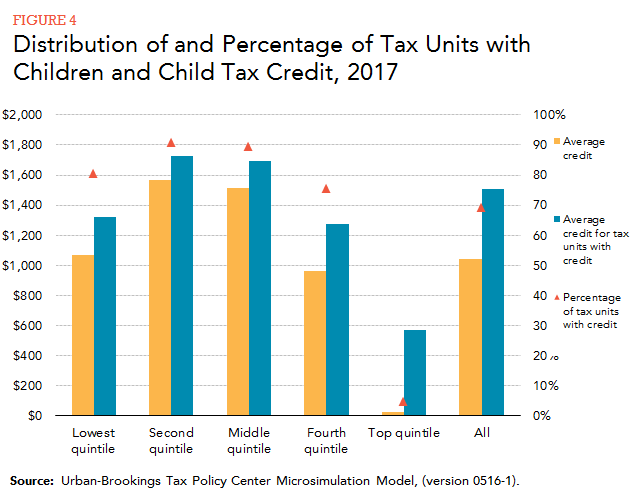 The federal budget counts the portion of a tax credit that offsets tax liability as negative revenue but classifies the refundable portion as an outlay. Most of the EITC is refunded—a projected $63.4 billion out of $66.2 billion in FY 2017, or 96 percent of the total credit (figure 5). In contrast, just 53 percent of the combined value of the CTC and ACTC ($27.1 billion out of $51.1 b illion) will be refunded in FY 2017, because many low-income families cannot get the full—or any—credit and because higher-income families can claim at least some CTC. 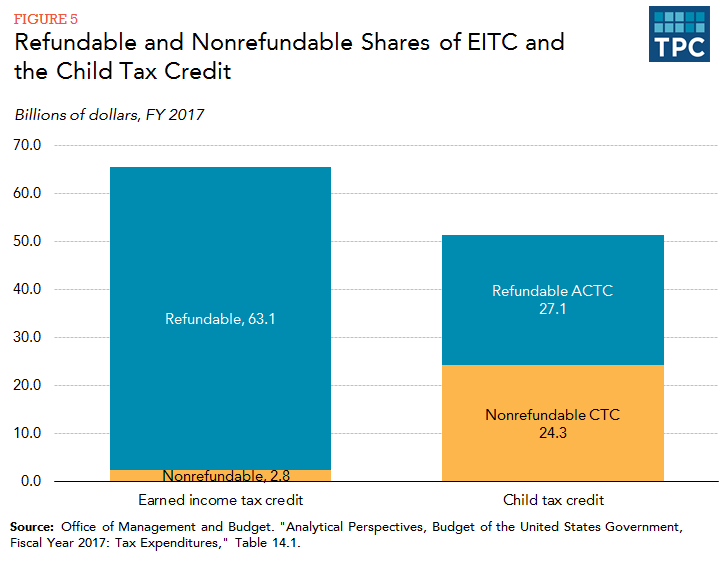 Starting with the 2017 tax-filing season, the IRS cannot give refunds for returns claiming either EITC or CTC until February 15. The delay applies only to returns claiming EITC or ACTC and affects the entire refund, not just the portion attributable to the two credits. Its purpose is to give the IRS time to verify income on these returns after receiving information returns from employers—now due by January 31, a month ahead of the previous March deadline. The delay might help the IRS detect and prevent fraud, but holding refunds could harm already vulnerable families. And little evidence shows that it will improve administration, especially given the tight resource constraints the IRS faces.

Nearly three-quarters of tax filers claimed a refund on their 2016 returns, many because of refundable credits. These refunds averaged about $2,900. Those who filed before February 12 were more likely to receive refunds, which averaged over $3,200. Prior research indicates that families claiming refundable credits tend to file early in tax season.

Advantages and Disadvantages of Refundable Credits

Refundable tax credits use the existing administrative structure of the IRS to deliver social benefits to households throughout the income distribution. Without refundability, households with too little income to otherwise owe tax could not receive benefits from the IRS. Further, most low-income families also incur payroll taxes. Allowing credits only against income tax liability ignores that fact.

At the same time, using the tax system to deliver social benefits imposes additional requirements on the IRS that could weaken its ability to fulfill its primary purpose—collecting taxes. In addition, refundable credits both increase compliance costs and encourage fraud.