What Are Itemized Deductions?

To reduce the taxable income on a federal income tax return, a taxpayer can either take a standard deduction or itemize deductions. In 2017, the standard deduction is $6,350 for individual filers, $12,700 for joint returns, and $9,350 for heads of household. The amounts are indexed annually for inflation.

Itemized deductions include state and local taxes, mortgage interest, charitable contributions, medical and dental expenses, and miscellaneous expenses such as legal fees and tuition.The total cost of itemized deductions would be approximately $250 billion in 2017. Table 1 shows some of the biggest: 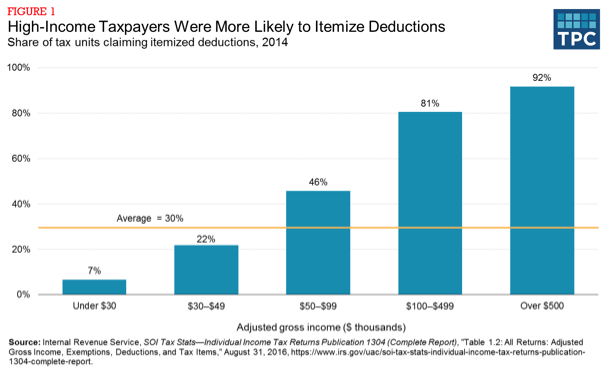 Some itemized deductions are limited for high-income taxpayers.

Many middle- and high-income taxpayers are subject to the Alternative Minimum Tax (AMT), which limits the benefit of some itemized deductions. The AMT is a supplemental income tax that requires many taxpayers to calculate their liability twice—once under the regular income tax and once under the AMT rules—and then pay the higher amount. Some itemized deductions, such as state and local taxes, are not allowed under the AMT. Others are limited. However, taxpayers who pay the AMT are not subject to the Pease limitation.

The share of returns that itemize deductions climbed from a low of 28 percent in 1994 to a peak of 36 percent in 2005 before dropping to 30 percent in 2014. A closer look at the three largest deductions—state and local taxes, home mortgage interest, and charitable contributions—helps explain why (figure 3). 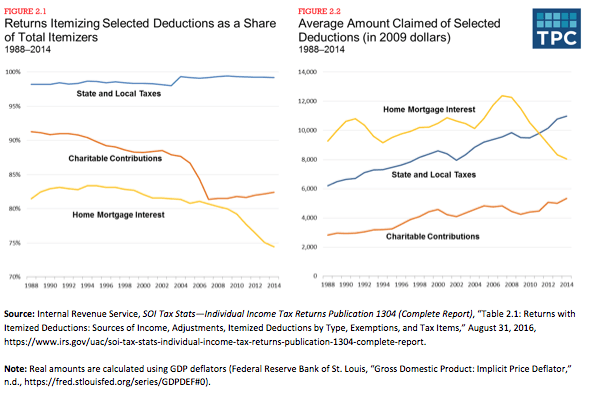 A change in any one of these deductions could affect the overall number of itemizers. For example, a decline in home mortgage interest might be enough to discourage a taxpayer from itemizing at all. Thus, the number of taxpayers itemizing state and local taxes or charitable contributions would also decrease.

The “Unified Framework for Fixing Our Broken Tax Code” released by the White House and the congressional Republican Leadership in September 2017 would increase the standard deduction to $12,000 for single filers and $24,000 for joint filers, repeal all itemized deductions except those for charitable contributions and home mortgage interest, and reduce the top individual tax rate from 39.6 to 35 percent (although the Framework left open the possibility of a higher top rate). These changes likely would greatly reduce the number of itemizers.