Capital gains are profits from the sale of a capital asset, such as shares of stock, a business, a parcel of land, or a work of art. A capital gain is realized when a capital asset is sold or exchanged at a price higher than its basis (an asset’s purchase price, plus commissions and the cost of improvements, minus depreciation). Similarly, a capital loss occurs when an asset is sold for less than its basis. Gains and losses (like other forms of capital income and expense) are all measured in nominal terms—that is, not adjusted for inflation.

Capital gains and losses are classified as long term if the asset was held for more than one year, and as short term if held for a year or less. If the owner of a capital asset dies and bequeaths it to another, the basis of the inherited asset is “stepped up” to the value of the asset on the date of the donor’s death. The step-up provision effectively exempts any gains on assets held until death from income tax. 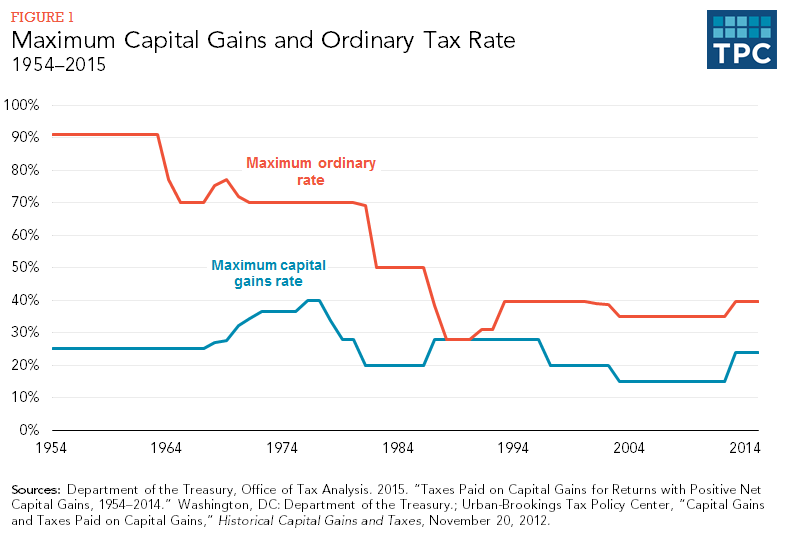 While the “Unified Framework for Fixing Our Broken Tax Code” released by the White House and the congressional Republican Leadership on September 27, 2017 did not explicitly address the taxation of capital gains, the 2016 House GOP blueprint for tax reform did propose replacing the current special tax rates for long-term capital gains and dividends with a 50 percent exclusion. The exclusion would also apply to interest income. Because the plan also would reduce the top income tax rate to 33 percent and eliminate the additional tax on net investment income, it would lower the top tax rate on capital gains and dividends from 23.8 percent to 16.5 percent.

But many commenters have noted that the lower tax rate disproportionately benefits the wealthy. The Urban-Brookings Tax Policy Center estimates that in 2016, taxpayers with incomes over $1 million will receive three-quarters of the tax benefit of the lower rates (table 1). 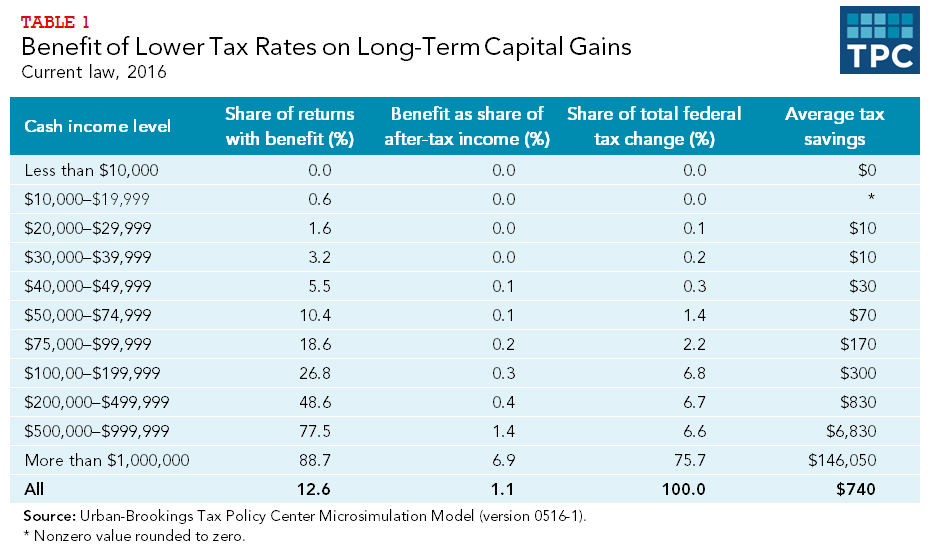 Reduced tax rates on long-term capital gains are not the most effective way to prevent corporate income from being taxed a second time. Recent Tax Policy Center research by Steven M. Rosenthal and Lydia S. Austin suggests that about one-quarter of corporate stock is held in taxable accounts (with the remainder held in, for example, IRA or other retirement accounts). In addition, capital gains from the sale of stock represents only about half of all capital gains. As an alternative to a lower tax rate on capital gains and dividends, Congress could address the potential double taxation of corporate earnings by integrating the two corporate income tax levels. That is, Congress could tax corporate earnings only once, taxing the corporation or its shareholders but not both. 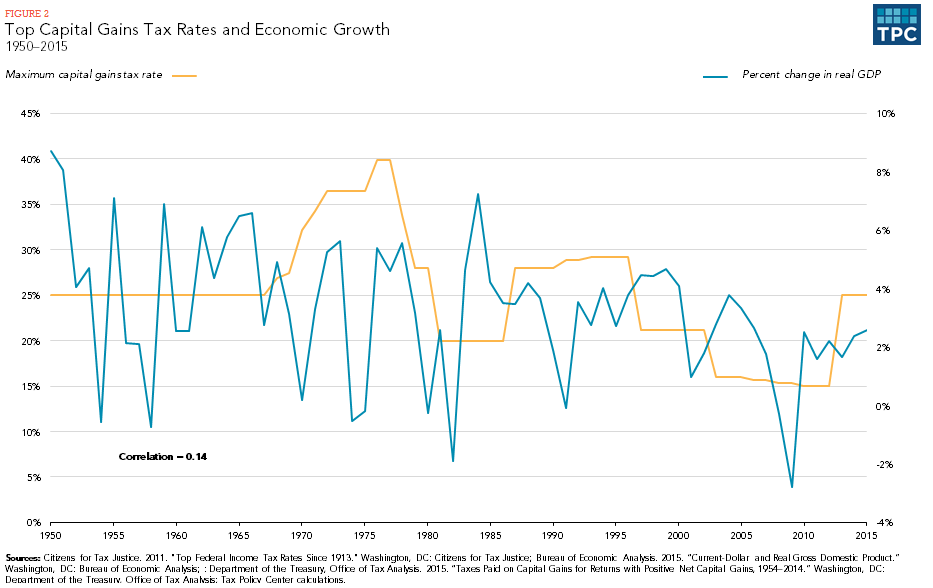 Although part of almost any nominal capital gain is due to inflation, the returns on other types of capital income are affected more than capital gains. For example, interest, rents, and royalties is taxed in the year in which it is generated. Capital gains, in contrast, are only taxed on disposition.

Because owners of capital assets often choose when to sell their assets, the tax rate on capital gains provides an incentive to defer sales. If an owner holds an asset until death, the asset’s tax basis is stepped up to permit heirs to sell without realizing any taxable gains. For investors, that lock-in effect can lead to inefficient portfolios or risk they would otherwise avoid. Small business owners may continue operating their businesses long after it would otherwise make sense to sell it or shut it down. But Congress could either tax capital gains at death or eliminate the step-up provision and use a ‘carryover’ approach in which heirs retain the lower basis. Either option would reduce the tax incentive to keep assets until death—and could raise substantial revenue that would make it possible to reduce tax rates or the deficit.

Finally, the gap between the tax rates on capital gains and on ordinary income also play a role in many tax shelters that undermine economic efficiency and growth. These shelters employ sophisticated financial techniques to convert ordinary income (such as wages and salaries) to capital gains. For top-bracket taxpayers, tax sheltering can save nearly 20 cents per dollar of income sheltered. The resources that go into designing, implementing, and managing tax shelters could be used for productive purposes. Those shelters also greatly complicate the tax system. A significant portion of tax law and regulations is devoted to policing the boundary between returns on capital assets and ordinary income.

For example, over the last several years private equity and other investment managers have been compensated with “carried interest,” which allows them to claim long-term gains rather than salaries. Many commentators argue that taxing carried interest just like wage and salary income would be fairer and more efficient economically. They also object that most service providers are not able to treat their income as capital gains. But others believe that the general partners are more like entrepreneurs who start a new business and may, under current law, treat part of their return as capital— not as wage and salary income—for their contribution of “sweat equity.” Still others defend the current tax treatment of carried interest as a way to mitigate the double taxation of corporate income.