How States Save for a Rainy Day

Budget stabilization funds (BSFs), also known as rainy day funds, allow states to set aside surplus revenue for times of unexpected revenue shortfall or budget deficit. Although BSFs have been widely adopted as a tool to mitigate revenue volatility, states follow different rules on how much revenue to contribute to their BSF annually, whether the balance should be capped and at what level, and under what conditions the funds can be spent. Research shows that BSFs increase state savings and reduce volatility.1 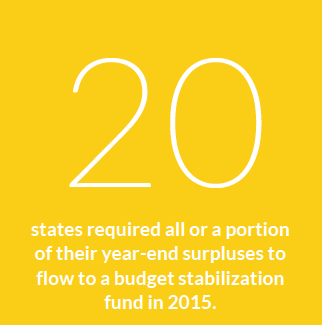 Today, every state but Montana has some type of BSF. States follow different rules about when and how to deposit revenues into their funds, and some states have more than one fund. States can choose to follow one or a combination of the following rules:

Some states have combinations of the above rules. Hawaii, for example, funds its Emergency and Budget Reserve Fund in part through tobacco settlement revenues and in part through deposits triggered by revenue growth. 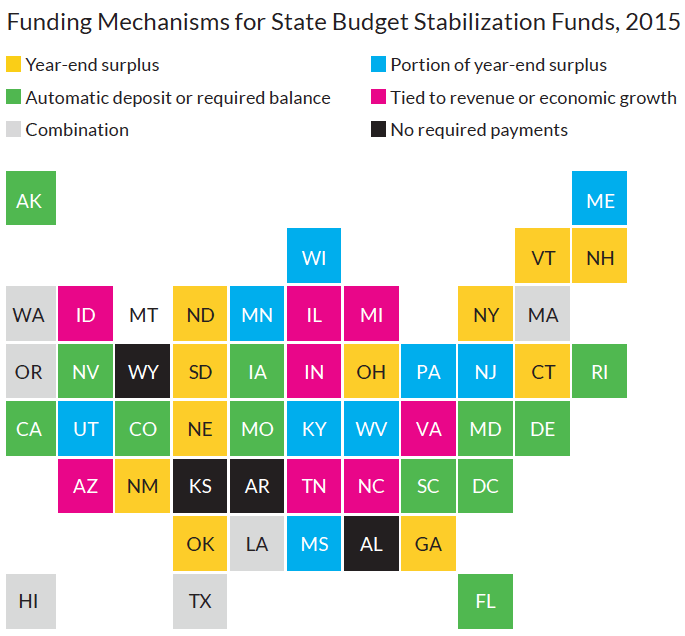 Note: Montana is the only state without a BSF. For more detailed notes on deposit classifications for specific states, see Megan Randall and Kim Rueben, Sustainable Budgeting in the States: Evidence on State Budget Institutions and Practices (Washington, DC: Urban Institute, 2017).

Twenty-five states cap the balances of their funds. The cap is either a percentage of revenue or expenditures. Most states that fund BSFs with operating surpluses stop transfers once the cap has been reached, but a few redirect surpluses to other funds for special projects or they remit funds back to taxpayers.

How Do States Use Their Funds?

In most states, the BSF is dedicated to closing fiscal gaps or maintaining government spending when revenues are projected to decline. States can access funds using one of the following rules:

Several states also allow the BSF to be used to cover short-term cash flow gaps. Funds are transferred to the general fund and must be paid back by the end of the year. 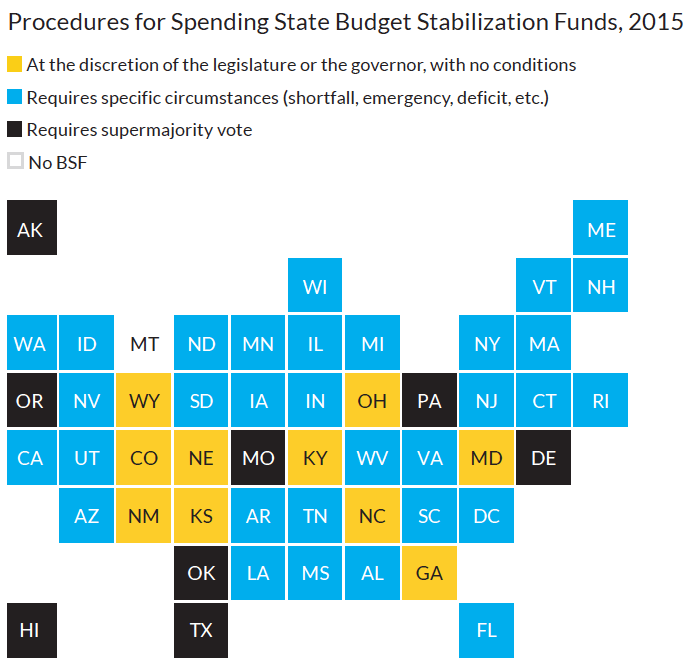 Beyond the Rainy Day Fund

In addition to BSFs, many states have separate reserve funds designed to cover shortfalls in vital funds such as education or Medicaid spending. Forty-three states and the District of Columbia also maintain a separate emergency fund for natural or man-made disasters. Unspent disaster fund dollars carry forward to the next year in most cases, and 23 states allow the executive branch to transfer unspent appropriations from other budget areas into the fund if a disaster occurs.

Some states use BSFs to circumvent tax and expenditure limits or to fund pension debt and other obligations.

One 1994 study, for example, found that several Midwestern states used their stabilization funds for property tax relief or to offset pension liability. New Jersey can use its fund any time its revenue comes in under what was projected because of poor forecasting or fiscal mismanagement.

A 1996 study found that BSFs stabilize spending only if contributions to the fund are mandatory. And a 2005 study found that strict deposit and withdrawal rules help mitigate economic volatility caused by the business cycle.

Some rules of thumb for designing a BSF include the following: