The Budget Cycle and Line-Item Veto

How and When States Make Their Budgets

Although most states produce a budget annually, 20 states produce a budget every other year for the upcoming two fiscal years, or biennially. The budget process typically starts in the governor’s office, where agencies submit funding requests based on guidance from the governor before debate moves to the legislature. Most governors can veto specific items in the final budget, and this is known as a line-item veto.1 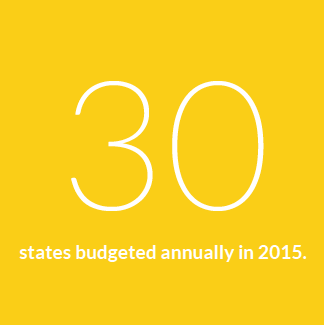 Policymakers in favor of biennial budgeting have touted many of its purported benefits, including lower spending, better planning, and more time for program evaluation. The evidence, however, is mixed on whether biennial budgeting offers more benefits than the more common annual budget cycle.

In 46 states, the fiscal year begins on July 1, with the remaining states starting on the first of April (New York), September (Texas), or October (Alabama and Michigan).

Step 2: The executive budget office prepares the governor’s budget based on agency requests and the state’s revenue estimates.

Step 3: The governor finalizes and submits the proposed budget to the legislature.

Step 4: The legislature holds budget hearings, considers the governor’s budget proposal, and passes its own version of the budget, which it then sends to the governor for a final signature.

Although these are the most common steps, exceptions apply. In Texas, for example, both the governor’s office and the independent Legislative Budget Board provide guidance to state agencies, and the governor is less influential early in the budget process.

In 2015, 44 states and the District of Columbia permitted the governor to veto specific items in the budget. In some states, the governor can veto an entry or amount; other states restrict the scope of the veto. Although the line-item veto is a common and popular institution and is often lauded as a way to rein in unnecessary spending, it’s not clear that it achieves this effect in practice. 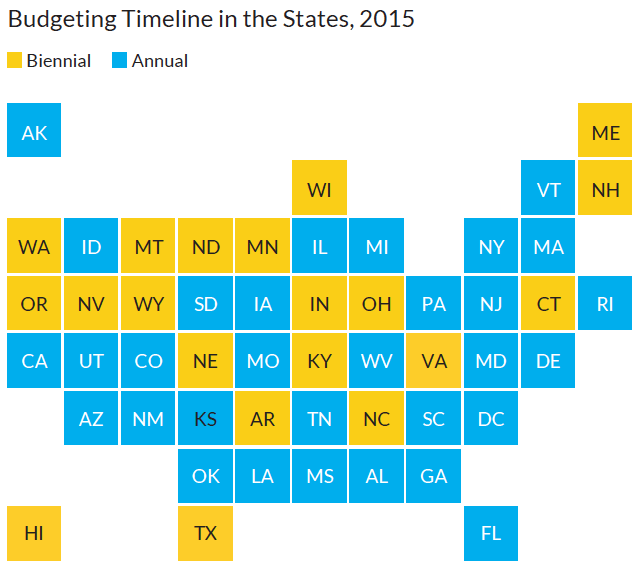 Statutory Procedure for When No Budget is Passed

Governor and legislature approve temporary budget, with appropriations based on prior fiscal year budget.

State makes monthly appropriations based on prior fiscal year budget; debt service on general obligation bonds not subject to limitations.

State adopts budget base within first 10 days of legislative session.

State appropriates based on prior fiscal year’s budget.