Balanced budget requirements (BBRs) prohibit states from spending more than they collect in revenue. They vary in stringency and design, and stricter antideficit provisions produce “tighter” state fiscal outcomes, such as reduced spending and smaller deficits.1 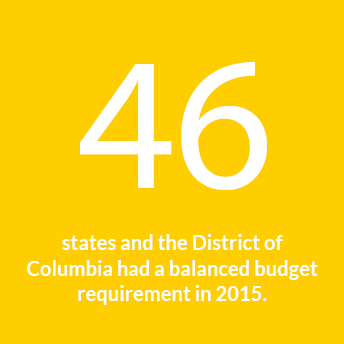 BBRs vary by state. Some states have lenient BBRs that only require governors to propose a balanced budget; stricter BBRs require that the enacted budget be balanced. BBRs typically only apply to states’ operating budgets. Capital and pension funds are usually exempt from BBR limitations. Researchers often use a classification system from 1987 that ranks BBRs by their stringency. In that system, strong antideficit rules

Eight states with BBRs also have permission to carry over deficits, allowing them to plug unexpected budget gaps with reserve funds or to address them in the following fiscal year rather than enacting midyear spending cuts or tax hikes. Five of these states budget annually, and three of them budget biennially.

How Do BBRs Affect Spending and Deficits?

But are BBRs always beneficial? Some research suggests that strict BBRs increase fiscal and economic volatility because they can force spending cuts or revenue increases when a state’s economy is already hurting. And research has shown that states are more prone to cut services rather than raise taxes to meet BBR requirements, meaning that strict BBRs can lead policymakers to slash school aid, restrict eligibility for optional Medicaid programs, or enact other cuts.

Even in the four states lacking formal BBRs, debt restrictions and similar provisions effectively restrict their ability to run a deficit.

For example, Arizona doesn’t have any statutory or constitutional prohibition on running a deficit. However, the state restricts borrowing and requires a positive cash flow to maintain operations.

Scholars have recommended that states use budget stabilization funds to offset the pressure states experience to cut spending during recessions (when revenues fall) or to mitigate the effects of rising revenue volatility. 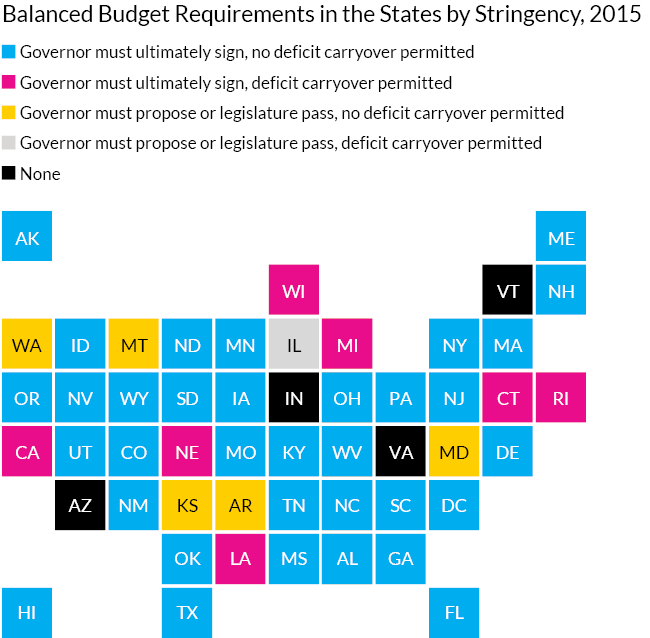