Anatomy of a Deal

Why Did General Electric Move from Connecticut to Massachusetts?

States often attempt to entice large firms to relocate by offering generous incentive packages, sometimes called “megadeals.” States see these packages as a way to promote economic development, and they may contain investments in business, workers, and community in addition to nongovernmental conditions that make such a move attractive. In 2016, General Electric (GE) decided to move its headquarters from Fairfield, Connecticut, to Boston, Massachusetts. Several government agencies in Massachusetts collaborated to offer GE millions of dollars in incentives to move, including special access to Logan International Airport and dedicated assistance for workers changing residences.1

“When we heard they were looking for, possibly relocating their headquarters, I think, we simply felt that with the ecosystem we had here–and with the colleges and universities we had here–it would be a mistake for us not to at least give it a try and see what happened.” 2

In addition to the normal suite of goods and services that a state government provides to all major companies in its jurisdiction, three distinct types of assistance are offered as economic development incentives. Massachusetts offered all three to GE: 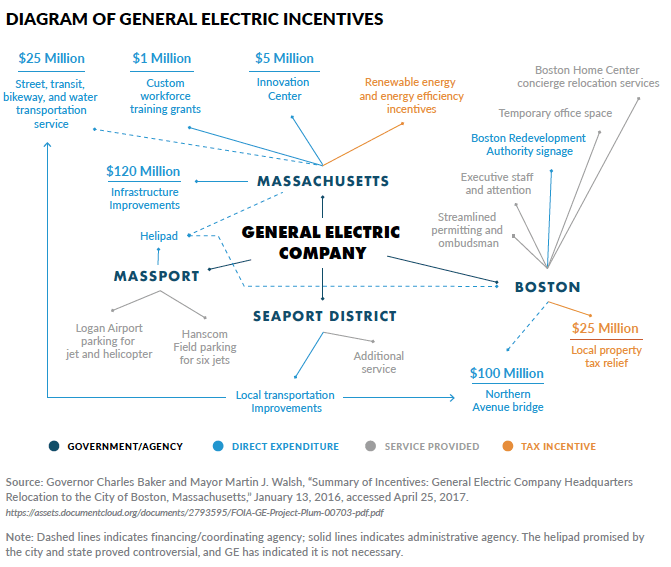 ^ This diagram shows the incentives included in the GE package, the level of government that will administer them, and, in some cases, the shared funding streams.

As with many megadeals that states offer firms, it is difficult to tell how much of the incentive was an extra reward for GE (that is, it was planning on moving anyway) and how much was necessary for it to relocate. Whether GE needed a publicly financed incentive to move to a high-technology and highly educated hub such as Boston is debatable.

To encourage accountability, the state should consider the following: