Who would qualify for return-free filing?

Who would qualify for return-free filing?

As many as 50 million taxpayers would qualify, including most of those who take the standard deduction and rely on wages for most of their income.

The size and scope of a return-free system would depend on its administrative and structural features. At best, some 50 million would qualify. This group would consist mostly of earners whose incomes come from wages and who choose not to itemize their deductions. The system could be expanded to include taxpayers with income from dividends, interest, pensions, individual retirement account distributions, and unemployment insurance, as well as low-income earners qualifying for the earned income tax credit (EITC). Taxpayers with uncomplicated itemized deductions could also be brought into the system.

In 2003, the Treasury conducted a study on how return-free filing could be implemented; the report was later updated to reflect 2007 tax data. Tables 1 and 2 break down the numbers. Note that the information is dated, as the 2017 Tax Cuts and Jobs Act changed the system with respect to personal exemptions, itemized deductions, and the standard deduction. 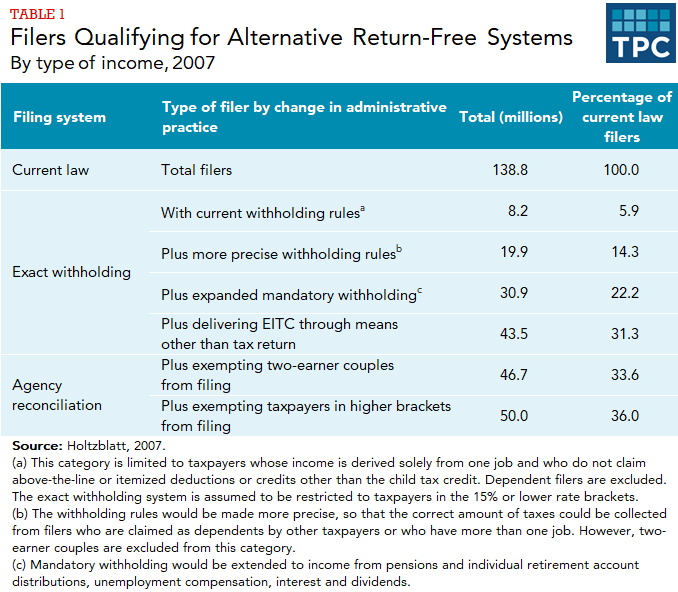 The Treasury reports that approximately 20 million taxpayers in 1999 had income solely from wages and salaries, claimed no credits (including the EITC), did not itemize deductions, and were in either the zero or the 15 percent tax bracket. Since almost all wage income is subject to withholding already, these taxpayers could more easily be shifted into a return-free system than the rest of the filing population.

If withholding at the source were extended to interest, dividends, pensions, individual retirement account distributions, and unemployment insurance benefits, the number would rise by 21.6 million. To some extent, taxes are already withheld on these forms of income. Mandatory withholding would expand the scope of a return-free system and could improve compliance, but may also add to taxpayers’ administrative burdens. To reduce these burdens, small payments and some payers—for example, those who hold debt (such as seller-financed mortgages), foreign banks, and other foreign-resident debt holders—could be exempted from withholding.

The EITC could be retained under a return-free system, but its administration would work differently depending on how the system was designed. Administering the EITC under an exact-withholding system would be complex but feasible. Under a tax agency reconciliation system, the EITC could continue to be administered through the tax system. With the EITC included in the return-free model, an additional 13.5 million taxpayers would have been eligible to use a return-free system in 1999.

Some deductions could be accommodated within a return-free system. Three of the most common are for state and local taxes, mortgage interest, and charitable contributions. The Treasury predicted that incorporating these into a return-free system would raise the number of eligible taxpayers by 1.7 million in the zero and 15 percent brackets and another 1.9 million in higher brackets. But these numbers represented a modest fraction of the then-current 33 million itemizers, demonstrating that itemizers do not generally meet other restrictions needed to avoid filing.