Tax expenditures make up a substantial part of the federal budget. Some of them are larger than the entire budgets of the programs or departments that spend money for the same or related purposes. For example, the value of the tax breaks for homeownership, although reduced by the 2017 tax act, still exceeds total spending by the US Department of Housing and Urban Development.

Table 1 ranks the top 13 US tax expenditures in fiscal year 2021, based on the 2019 estimates by the Joint Committee on Taxation (JCT). The table also shows estimates for the same tax expenditures prepared by the US Department of the Treasury and reported by the Office of Management and Budget (2020). 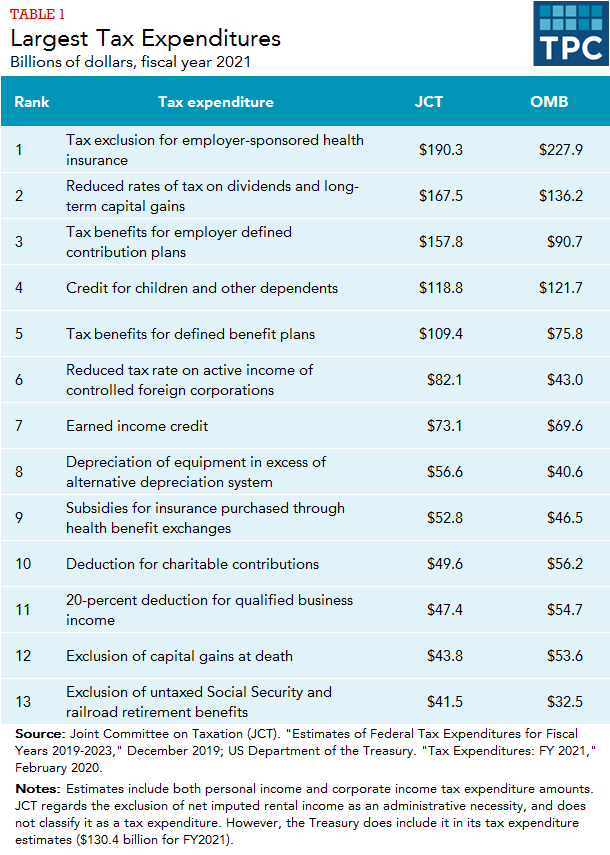 The largest tax expenditure (an estimated $190.3 billion in fiscal year 2021 is the exclusion of employers’ contributions for employees’ medical insurance premiums and medical care. Under this provision of the tax code, contributions are excluded from an employee’s gross income, while an employer may deduct the cost as a business expense.  OMB estimates this provision will cost $227.9 billion in 2021.

The next-largest tax expenditure on the JCT list is the preferential rate structure for capital gains and dividends ($167.5 billion in 2021), which are taxed at rates ranging from 0 to 20 percent, as compared with individual income tax rates that range from 10 to 37 percent. OMB estimates this provision will cost $136.2 billion in 2021.

The third- and fifth-largest tax expenditures are the benefits for tax-qualified retirement saving accounts. The tax on contributions, as well as the income earned within the accounts, is deferred until withdrawal begins at retirement. At that point, in addition to the benefits of the deferral, many taxpayers are in a lower bracket. Alternatively, some Roth retirement saving gets no deferral of tax on deposit, but complete exemption from tax of all investment returns on the saving. The revenue losses from retirement saving accounts in 2019, measured on a cash flow basis, are estimated by JCT to total $157.8 billion for employer-sponsored “defined-contribution” plans such 401(k) plans and $109.4 billion for defined-benefit plans. (Comparable OMB estimates are $90.7 billion for defined contribution plans and $75.8 billion for defined benefit plans). JCT reports additional losses from deductible individual retirement accounts ($19.9 billion), back-loaded individual retirement (Roth) accounts ($8.7 billion), and plans for the self-employed ($17.3 billion), and a savers’ credit ($1.2 billion).

The fourth-largest tax expenditure is the credit for children and other dependents ($118.8 billion in 2021). The 2017 Tax Cuts and Jobs Act (TCJA) doubled the child credit to $2,000 per qualifying child, increased the maximum refundable credit amount to $1,400, raised the income at which the credit begins to phase out to $400,000 for joint returns ($200,000 for single), and introduced a new $500 credit for nonchild dependents.  OMB estimates these credits (including the refundable portion) will cost $121.7 billion in 2021. The TJCA increases in the child credit will expire after 2025.

In general, tax expenditures for individuals are larger than tax expenditures for businesses. Only two business tax expenditures made it into the list of the top 13: the reduced tax rate on active income of controlled foreign corporations and accelerated depreciation of equipment in excess of the alternative depreciation system. The sixth largest, the reduced tax rate on the active income of controlled foreign corporations, will cost $82.1 billion in fiscal year 2021, according to JCT. OMB scores this proposal as costing a smaller amount ($43.0 billion) because OMB counts as an offset the gain in revenue from a transition tax on profits accrued prior to enactment of the TCJA. The eighth largest, the tax subsidy for investment in equipment, allows firms to deduct purchases of qualifying equipment immediately (bonus depreciation) through 2022. In fiscal year 2021, it will cost $56.6 billion according to JCT and $40.6 billion according to OMB. Beginning in 2023, however, bonus depreciation is scheduled to phase out at a rate of 20 percent per year, reaching zero in 2027.

The seventh-largest tax expenditure, the earned income credit ($73.1 billion in 2021), mainly benefits low-income families with children. The credit increases with family size and is phased out as income rises above a threshold amount. Most of the credit’s budgetary cost comes from the portion that exceeds income tax liability and is therefore counted as outlays, rather than as a tax expenditure, in the Office of Management and Budget estimates. Including the outlay costs, OMB estimates the EITC increases the budget deficit by $69.6 billion in 2021.

The ninth-largest tax expenditure is the subsidy for health insurance purchased through health benefit exchanges under the Affordable Care Act ($52.8 billion). A TCJA provision reduced this subsidy by eliminating a penalty tax on individuals who lack insurance coverage, effectively reducing the number of people who purchase subsidized insurance coverage. OMB estimates this subsidy will cost $46.5 billion in 2021.

The eleventh-largest subsidy is the 20 percent deduction for qualified business income of individual taxpayers ($47.4 billion in 2021). This deduction, introduced by the TCJA for tax years beginning in 2018, is available to individuals with income from self-employment and ownership of shares in pass-through businesses (partnerships and subchapter S corporations) but is partially limited for high-income individuals according to complex criteria based on the types of activities from which they earn income, the wages they pay to their employees, and the amount of capital they own.  OMB estimates it will cost $54.7 billion in 2021. The deduction will expire after 2025.

The twelfth largest subsidy is the exclusion of capital gains on assets transferred at death or by gift.  Assuming that the alternative treatment is taxing unrealized capital gains on the decedent’s final income tax returns, JCT estimates this proposal will cost $43.8 billion in fiscal year 2021, while OMB estimates it will cost $53.6 billion.

The thirteenth-largest tax expenditure is the exclusion of untaxed Social Security and railroad retirement benefits ($41.5 billion). These benefits are partially or fully excluded from adjusted gross income for taxpayers whose incomes fall below threshold amounts.  OMB estimates the cost at $32.5 billion in 2021.