How much spending is uncontrollable?

How much spending is uncontrollable?

Technically, lawmakers can control all spending except the interest due on government debts. However, entitlement spending is sometimes said to be uncontrollable for political rather than legal reasons. It can always be controlled legally by reforming programs, but when an entitlement is extremely popular, reform may require more political courage than is readily available. Similar concerns apply to many tax expenditures—tax breaks that function much as spending programs.

Discretionary spending, set in annual appropriations acts, includes most defense programs as well as spending for education, transportation, environmental protection, law enforcement and border security, international assistance, and a host of other programs.

Mandatory spending, controlled by laws other than appropriations acts, includes spending on entitlement programs. This includes the big three—Social Security, Medicare, and Medicaid—and many smaller programs such as supplemental nutrition assistance, federal civilian and military retirement benefits, and unemployment insurance. Spending is also mandatory for items the government cannot avoid, such as plaintiff awards from lawsuits.

Government spending on mandatory programs and net interest on the public debt are often described as “uncontrollable.” Entitlements can be controlled legally by reforming them, but this can be highly unpopular politically. Interest costs can be controlled indirectly by curbing spending growth or raising revenues, but that is also difficult.

Uncontrollable spending has been growing much more rapidly than total spending and thus accounts for an ever-larger share of the total. However, most growth has been concentrated in entitlements that serve the elderly and in health insurance. The population has been aging rapidly, and that affects both Social Security and health programs. The latter have grown twice as rapidly because even after adjusting for aging, health costs per beneficiary have been growing faster than incomes per capita. Health cost growth has slowed recently, but the Congressional Budget Office expects it to reaccelerate in the long run. Social Security and Medicare, the largest health program, are among the most politically popular programs.

Whereas discretionary programs are funded by specific appropriations that generally last only one year, entitlement spending for Social Security and Medicare is ongoing and is not scrutinized as carefully or as often as discretionary spending. The laws establishing entitlements specify who is eligible and describe the benefits. The government then pays for as many eligible individuals as claim them. Thus, total entitlement spending cannot be predicted with precision from year to year—and is, in this narrow sense, “uncontrollable.” 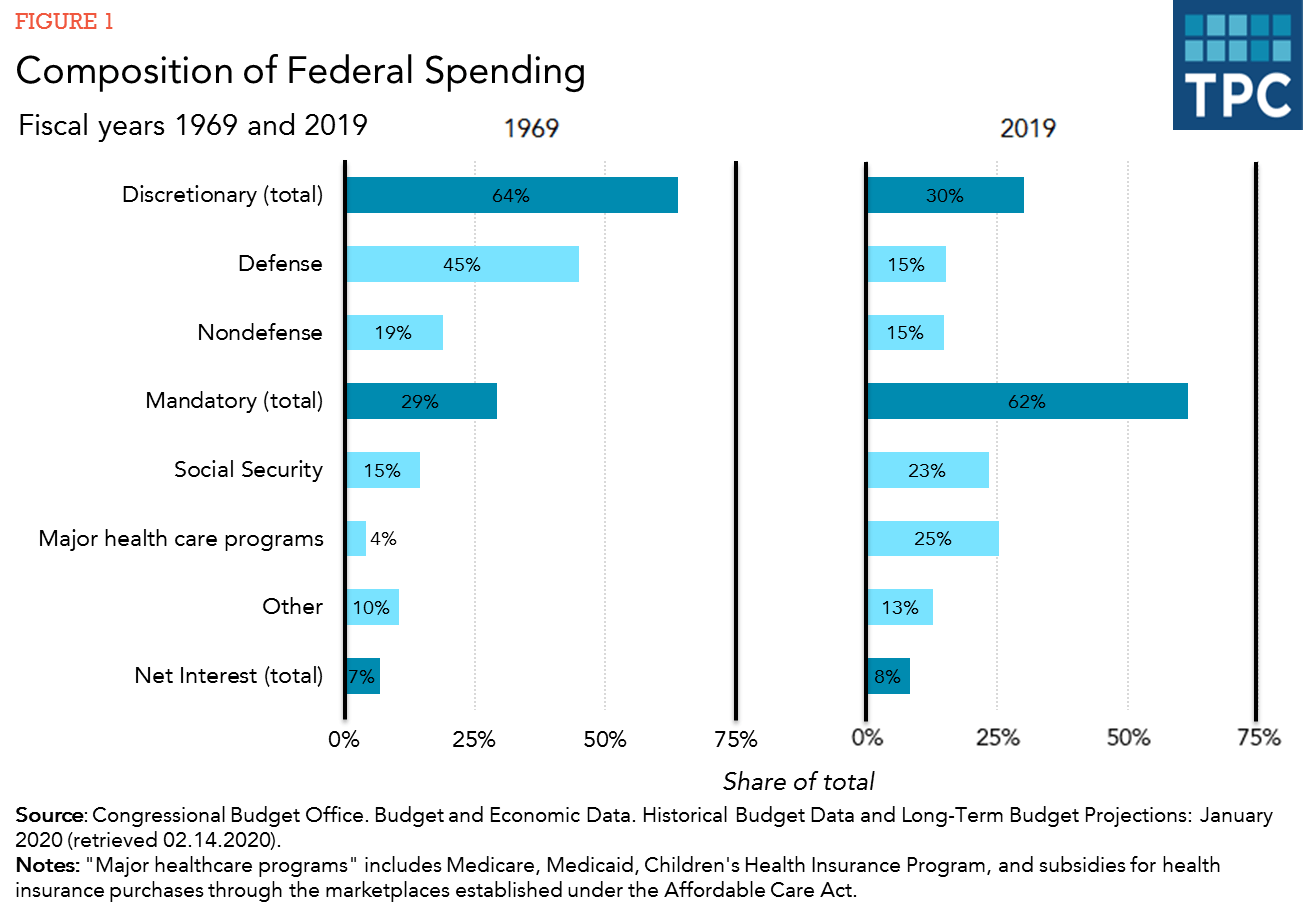 As a matter of law, though, entitlement spending can be controlled by changing eligibility criteria or the generosity of benefits. This would require Congress to actively change the law, but as implied above, that is sometimes politically perilous. In contrast, a discretionary program, unless renewed, will automatically expire when its funding does. Discretionary spending is therefore often assumed to be easier to control than entitlement spending. But the difference should not be exaggerated: cuts in appropriations from year to year can also be highly unpopular and politically difficult. Also, it should be noted that similar concerns apply to tax expenditures—tax breaks that function much like spending programs run through the tax code.